In early December I ran out to Bali again.  My friend was in town from the US, and there was another group of friends from Singapore that were out celebrating another friend's birthday.  What better place to celebrate your birthday, than Bali.

I'm generally a good planner, but I didn't book accommodations early for this trip.  I ended up choosing a 1 bedroom villa at Danoya, because it had its own private pool and was two levels (i.e. had stairs).  I have always liked stairs.  Further, even though the property didn't have a restaurant on-site, the villa had a kitchen and it was nice to have a couple of people come over and make breakfast.  I enjoyed the mee goreng (i.e. noodles) one morning and the nasi goreng (i.e. rice) another morning. 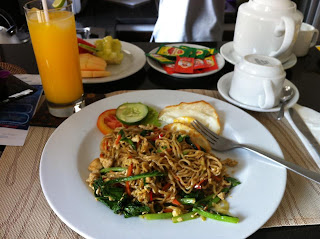 ****  My friends stayed at Villa Massilia and it appeared that the party of about 20 people had the complex to themself.

On Friday night, I went out to Ku De Ta for drinks and a quick bite.  There I met Sanaz and her husband.  We share mutual friends and they had been traveling throughout SE Asia, so it was a treat to meet and chat.  Another thing that was cute was that Sanaz and I carried the same Chanel handbag!

Saturday, was spent lounging by the pool and with friends.

Sunday, before running around and showing my friend, Taiwanna, the sites I had to watch the Margarito v Cotto boxing match.  As the fight was starting, there was a knock on the door and the hotel staff asked us if we needed help with our luggage.  OK, most people may consider this rude ~ but I knew I was already overstaying my welcome and there was a driver waiting for us so we could see the sites.


After checking out, I asked the driver to please take us to a bar so we could watch the fight.  Within 10 minutes we were at a bar and taking in all the action from the ring!  Talk about a good driver, and lucky man since he was able to watch the fight as well.  Miguel Cotto won the fight, and Margarito lost AGAIN.  Honestly though...  What's it going to take for Antonio Margarito to stop risking his vision?!!?


Anyway, another great trip with some sports (i.e. even if it was only on TV)...

After the fight we went to UC Silver (i.e. took a tour and stopped in the shop). I was determined to check out the store since I'd seen so many ads.  Admittedly, I'm not a silver person, but I was taken in by the design and the dragonfly.

We were greeted by a gentleman who gave us a tour.  It was a public holiday so there weren't many people working.

After our tour we went to the store and I discovered that they also sell gold.  However, the name of the company IS UC Siler (i.e. and not UC Gold) so I decided to stay true to the name.

Afterwards we visited the Bali Zoo to ride the elephants.  Yes, I've done it before...  BUT you can never ride too many elephants...  Ha!!! 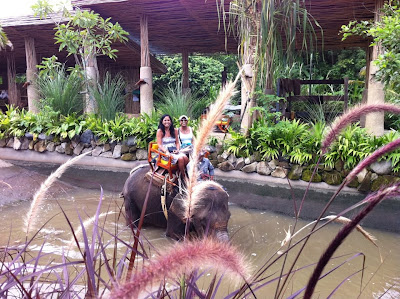