Wendover, NV ~ A place to gamble less than 90 minutes from Salt Lake City 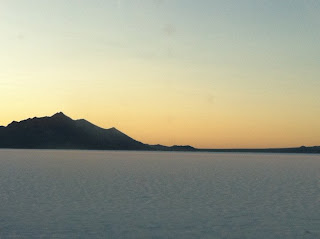 If you're looking for very low stakes craps and you're in Salt Lake City, I'm going to recommend that you head to the Nevada border.

The casinos I scouted out with some friends included Rainbow Casino, Montego Bay Casino, and some other one. They're not my favorite casinos on the planet, but when in a pinch, they'll do!


As we left Montego Bay to go to a different casino, we saw a small girl at the end of this hallway.  Immediately, I thought of the girls from the movie, "The Shining".

Warning: With such low stakes, you end up with novice players who don't know how to play.  For example, at the blackjack table one of the players got mad and left the table when the dealer started to take her money.  She had thought the dealer had busted with a 28.  No, not so much.  The dealer had a soft 16 and was forced to hit.  Yeah...  That's the caliber player you might end up sitting next to so don't bet high.
THE WIRK
Posted by THE WIRK at 12:42 PM No comments:

Deron Williams is acting like a turkey... Let him go to Turkey...

If Deron Williams wants act like a turkey and play in Turkey, does anyone care?  I sure don't. If I was an NBA owner I'd charter a bus to the airport for all the players who wish to go overseas.  I'd call the players' bluffs every day and twice on Sunday.

Dear player: If you want to play internationally, that's your choice.  Go if you want to go.  Nothing is stopping you.

Personally, and I've written about this before on some forum (i.e. if not in this blog specifically), I think Williams is an idiot.  Unfortunately, he's not alone.  5 million guaranteed in Turkey.  Great.  I happen to think that these people are very short-sided in their thinking.

I don't believe that NBA players with viable NBA careers think international competition is the best competition.  I also don't think that playing overseas is smart from a marketing perspective since I feel it would make people lose interest in their brand.  This isn't the Yao Ming phenomenon.  Yao already had his audience.  International players who grow up in their native land have a built in audience their and then "matriculate" to the NBA.  The same metaphor can be used when amateurs matriculate to the professional level.  No offense to international competition, but FIBA and global basketball is much different compared to the NBA.

As I've stated before, I predict that the NBA lockout will go til at least 2012.  I think the NBA All-Star festivities in Orlando won't happen.  I also think with a shortened season, that the teams that are already "stable" will sprint to the finish line.  Tough luck to the teams that are rebuilding or hoping that they could "gel" and build "chemistry".  Players will enjoy their summers and extend vacations.  Some players will work out with MLB baseball teams and/or join other summer leagues.

Of course, this is all my opinion, after experiencing the 1998 NBA lockout and having an inside perspective into how it affects players, coaches, agents, media, and fans.

In all honesty, I'm not really a fan of Deron Williams to begin with so I have to ask why anyone is really listening to him?  The guy is on the New Jersey Nets.  Who cares?!!?

Dear, Deron Williams:  Talk is cheap.  Let us know when you have a boarding pass.

I'm in Singapore and the lockouts are still ON...  Just like last year, it's tough to keep a blog about sports going during the summer (i.e. especially since I can't follow baseball as closely here).  However, with the Marina Bay Sands (i.e. think Venetian and Palazzo) close by, I can definitely talk to you about gambling.

There are no places to play craps in Singapore.  If you know of a spot, please pass the information on.  Since I don't know and don't want to learn how to play Sic bo, I've primarily focused on playing blackjack.

The minimum table bet is $25 for blackjack.  In addition the Marina Bay Sands offers $50 and $100 tables, in addition to other higher limit areas.  There are some differences here as to how the game of blackjack is played, compared to the US.

The dealers deal the cards differently here.  You know how in the US (e.g. Las Vegas, Atlantic City) the dealers go around the table twice and deal two cards to the players and himself/herself?  Next, the dealer looks at the card under the face up top card to see if he/she has blackjack.  Well, the dealers here in Singapore don't do that.

In Singapore, the dealer gets one card and everyone can take action if they wish.  Only after the players have stayed/busted, does the dealer take his/her second card.   For people like me who believe in luck and try to predict when a "ten" is coming, I think it's better here, because you can rely on your intuition to determine whether a 10 is likely to be pulled from the show.  ****  Of course there is not an exact science to this, but then again most gamblers believe in streaks and aren't rational when it comes to cards having a degree of randomness.

As of the two visits I've made to the casino, I've been successful.  Personally, I prefer to play at the lowest minimum table and raise my bet at my own discretion.  I've been playing with various wagering strategies and have been doing well.

Just as in any casino, you have to be careful about who you play with.  The last visit I made to the Marina Bay Sands casino had me watching a woman who made some really strange plays.  Some times she would hit/stand on 15 or 16 (i.e. regardless if it was hard/soft) and if the dealers was showing a 5 or 6.  One other crazy play she made occurred when she split 10s, and the dealer was showing a "King".  After the split, she ended up hitting on a hand of 13 and of 14.  Karma got her and she busted on both hands...


Needless to say, she wasn't making any friends at the table.  She was killing everyone.  Just terrible...

Don't be that girl.  Good luck!

Let's take a look at Netball...

Yes, both the NBA and NFL are locked out.  No, I have nothing to say about the NHL or MLB right now.  So, let's look at Netball.  Why?!?!  Why not?  I'm out of the country and where I am, the World Netball Championships are taking place.  Yes, I know you have no idea what I'm talking about.  I'm in Singapore.  Want more information on the event?  Here's a link: http://www.wnc2011.com/home/index.php.  If you're in Singapore and want to check out the action, here's a link to purchase a ticket.

I have no idea what Netball is.  Honestly, I had no idea even existed as a game and/or sport.

Want to know more about it?  Here's a video I found on youtube...

It looks like a cross between basketball and "horse".  Go figure.