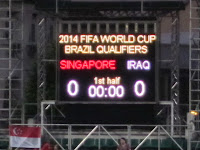 Soccer, football, whatever you wish to call it was what I checked out last night.  In preparation for the 2014 FIFA World Cup in Brazil there are qualifying matches that need to be played.  Last night I took in Iraq v Singapore at Jalan Besar Stadium. 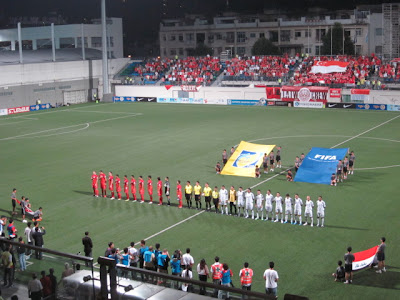 I know very little about soccer to begin with.  After watching the most recent World Cup on TV, I can tell you which countries had the best looking men and go on and on about my appreciation of the soccer player body...  However, I'll spare you in this post.  Further, for the purpose of this post I'll do my best to speak "soccer/football" as properly as possible until I can't take it anymore... 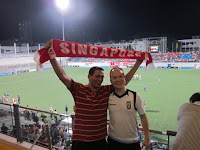 I went to the match with Xander and Andreas.  I work with both of them and they're fun.  They both came prepared.  Andreas was dressed in red, and Xander sported a Singapore scarf.  I just wanted to get out of my work clothes and not melt to death in the humidity.  In the opening few minutes or so of the game, Xander asked us who we thought would win and for a prediction on the final score.  I predicted that Iraq would win 1-0.

At that very moment, I also regretted not running across the street to put a bet on the game!  Oh well.  ****  Incidentally, I would've won. 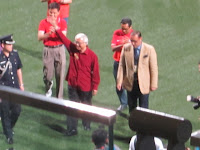 After we filtered into the stadium and listened to the national anthems, we noticed that Tony Tan, the newly elected president of Singapore was taking the field, to greet the players.  That was cool.
In the first half, Iraq was more aggressive and had more offense.  Singapore's goalie was working hard. 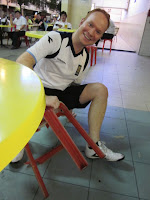 As the match progressed the guys were getting thirsty and with no alcohol being served in the stadium we headed to a food court for a drink. At the food court, as we indulged in a Tiger beer, Xander managed to break his chair!  Hilarious.  Thank goodness it wasn't me. 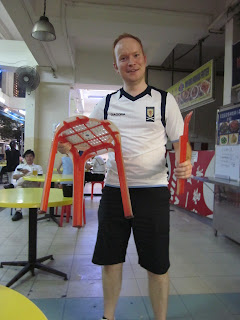 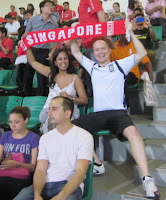 We returned to our seats after missing a portion of the 2nd half and sure enough Iraq scored again.  It was a weird goal...  Surreal how the ball bounced into the goal...

Singapore lost, but it was fun to do something sporty again.  Happy I got the invite!