RFK Stadium is turning 50 ~ I Remember 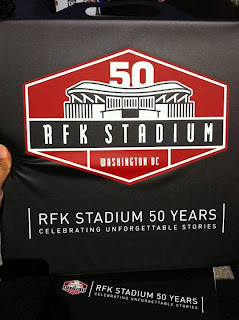 I'm not originally from the DC/VA/MD area, but I've been in the area long enough to consider it "home".  Yesterday, I attended a press conference to kick off the RFK Stadium 50th Anniversary Celebration.  Some notables in attendance, were Vincent Gray (i.e. the Mayor of DC), Kevin Payne (i.e. President and CEO of DC United), Charles Mann (i.e. former Washington Redskin), Gregory McCarthy (i.e. Vice President of the Washington Nationals), and Norm Everson (i.e. former player for George Washington University).  If you're like me, you'd never heard of Norm either, but if you were at the event, I assure you that you'd never forget him.

Greg O'Dell, President and CEO, of Events DC kicked of the event and various government and team officials spoke about their own RFK memories.  Everything from football games, to baseball coming back to DC, to boxing, to musical performances have taken place at a building that was described as having "soul".  The "I Remember" campaign is personal and definitely had people more than willing to recall their own experiences at the venue.  Norm's story was the last one and had people talking (i.e. if you want the details, "google" it)!

As someone who moved to the DC area in 2004, I was bummed to hear that I missed the Michael Jackson "Victory" tour and surprised to learn that boxing matches had taken place there.  I've only been to RFK a handful of times, and it was for the Washington Nationals, the Military Bowl, and a DC United Game...

Well, RFK Stadium, I look forward to creating more memories with you.

Through the "I Remember" campaign, fans can vote for the RFK All-Stadium Team.  This "team" will be 50 of the greatest athletes and entertainers in stadium history.  Fans can also share pictures and memories with each other.  The URLs are: http://www.rfkstadium50.com/ or http://www.facebook.com/RFKStadium.

In addition to numerous events occurring at RFK the rest of the year, October 29 is RFK Stadium Appreciation Day.  Memorabilia will be on display at the DC Armory from 9AM-7PM.  The event will also feature family-friendly activities (i.e. player appearances and giveaways).  Further, tours of RFK Stadium will be given at 10AM, Noon, and 2PM.  These tours will give visitors a behind the scenes look at the locker rooms and the field.  The tours are free, but please register at the following link: http.://www.rfkstadium50.com/