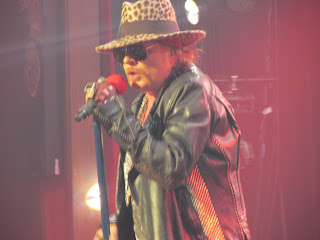 For my wedding weekend, I decided that I didn't want a rehearsal dinner.  Instead, my husband-to-be and my great friend, Pat, went to see Guns N' Roses at the Hard Rock Hotel and Casino in Las Vegas.  I hadn't seen Guns N' Roses, since I went with my brother to a show at the Hammerstein Ballroom in 2006, and I figured the concert would be more fun than some stuffy meal before my wedding day.

Guns N' Roses performed at The Joint and took the stage at 11PM.  They played for hours.  HOURS...  I couldn't tell you exactly how long they played, since the show seemed to go on and on and on.  We actually left before the concert officially ended and went to go eat at Mr. Lucky's. 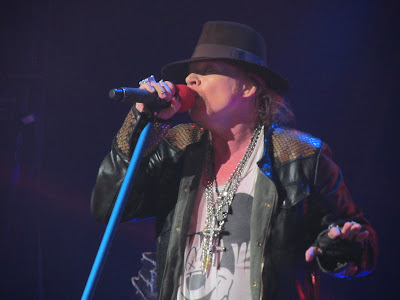 If you ask me, the show was good even though it wasn't the Guns N' Roses of old.  My friend, Pat, is convinced that there were Axl Rose doubles being used throughout the show.  HE'S CONVINCED.

I can't really tell you, whether I believe Pat or not, because I didn't watch the show that closely.  Regardless, I had a good time!  Guns N' Roses residency at The Joint is over, and I'm happy I had the chance to see "them" perform again.