Mike Tyson's Undisputed Truth ~ Up Close and Personal in DC 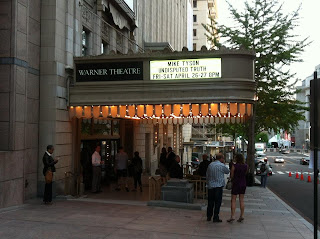 Friday night I went to see Mike Tyson perform his Undisputed Truth show.  I was there, front row, dead center...  When I heard Mike was coming to DC, I bought my ticket right away.  I wasn't going to miss it.

I don't remember when it was, but a year or so ago, my dad told me that a casino offered him a chance to meet and greet Mike Tyson.  My dad isn't like me.  He couldn't have cared less.  I, on the other hand, looked at flights and tried to determine whether I had the energy to rearrange my schedule and go.  Needless to say, the trip didn't happen.

Friday night, I took one of my pink boxing gloves to the Warner Theatre and hoped that Mike would sign it. When I got to the show, I noticed on the memorabilia table, that there was an autographed Mike Tyson boxing glove.  I asked the guy and he said that Mike autographed a bunch and they were give aways at a previous show.  That was the last one left.  Yes, I grabbed it.  The glove is MINE and if you want to make an offer (i.e. which I will refuse, because it's my newest "precious thing"), feel free to reach out. 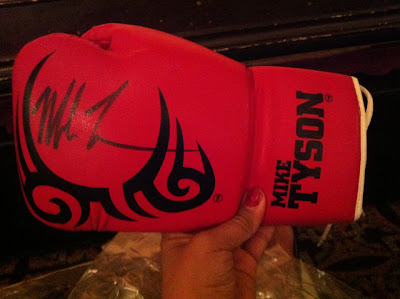 When I was younger, I played Mike Tyson's Punch Out.  I could only beat Glass Joe and maybe the guy after him.  My brother loved the game.

I watched Holyfield v Tyson.  I remember the ear.  When I saw Evander trying to get into the Georgia Dome (i.e. without a ticket, so he was denied) at a Falcons game, I'll admit I tried to get a good look at his ear.

I've stayed at the Canterbury Hotel in Indianapolis.  I didn't think he was guilty.

I never really watched Mike Tyson fight.  "Pay-per-view" never happened at my house, and I remember Mike's fights not lasting very long at all anyway.  He dominated.  It was basically a no brainer.  Mike Tyson would win. 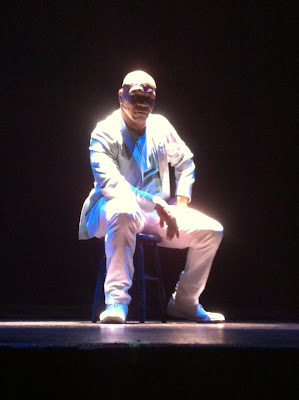 Shoot to Friday...  When the curtain raised, I had Mike Tyson sitting on a stool, staring right at me.  WOW.  Look at his face.  That is intense.  The former heavy-weight champion of the world, Mike Tyson, was right in front of me, and I was ready to hear what he had to say.

Mike's Undisputed Truth isn't all about his career.  He shares his feelings about his mom, dad, Cus D'Amato, Muhammad Ali, Robin Givens, Don King, Evander Holyfield, and his kids.  He covers a lot of ground in 90 minutes.  I'm not going to spoil the show for you by telling his jokes.  If you want to know what he has to say, go to his show.

In front of a packed house (i.e. I turned around and looked), Mike performed the cliff notes version of his life.  As he talked about the various stages of his life, slides flashed on the screen.  The images added color to the well thought out script.  The tough times were made lighter with some self-deprecating humor and I get a sense that Mike really is happy now.  Mike Tyson is entertaining.

At the meet and greet after the show, I found him to be very gracious and polite.  I told him I was a fan, that I used to play Mike Tyson's Punch Out -- but that I wasn't very good.  He smiled and said, "Thank you."


He's obviously not ready to fight, but he looks fit.  He looks happy.  He reached his hand out for a handshake and although he looks intimidating, it was like I was reconnecting with an old friend.  As I walked away he asked, "Who are you here with, ma'am?"

I simply replied, "Myself.  Just me."  I wouldn't have missed it for the world.