The folowing intro was written by my friend the Insideplaya:

While in her never ending pursuit of the hotness, The Wirk caught her second Janet Jackson gig in three nights. Please find below her impressions of Miss Jackson’s performance.

And now my blog begins...

I was once told by a very good friend of mine, “Who else besides you and Craig Sager went to 3 NBA playoff games in 3 nights?”. This was after I spent Friday taking my work conference calls in Atlanta so I could watch the Hawks beat the Celtics later that night – and then flew back to DC on Saturday to watch the Cavs beat the Wiz – only to return to Atlanta on Sunday to watch the Celtics lose again… Sports and music (and handbags – but nobody wants to hear about that) are my “things”…

Not too many people would hustle (read: DRIVE) to New Jersey to see Janet Jackson two days after seeing the concert (more or less in her backyard) in DC. We’re talking a solid 8.5 hours driving for about a 2 hour performance… But when I pull the trigger and decide – I commit – and I decided months ago, I was gonna check this show out.

I drive to the arena and begin to think about what I had seen on Wednesday and mentally prepare myself for the worst. I stop at a visitor center on the drive up to grab a burger and some pie and a blueberry muffin in cellophane. I buy the muffin. I chuckle to myself that if Janet tries to eat someone in the crowd – I can hurl the muffin at her to calm her down… Yeah, I’m mean some times – when I’m pissed – and after Wednesday, I was pissed about what I saw and didn’t see.

I talk my cousin’s daughter into going with me to the show and tell her to bring 2 friends. I think to myself this will definitely be an interesting night, since I haven’t seen my cousin’s daughter since she was a baby in the Philippines about 23 years ago… If it weren’t for myspace and facebook I doubt I’d even recognize my own blood. I feel guilty using the possibility of an LL Cool J appearance as bait to entice her to go, but she’s young enough to handle disappointment and get over it, so I don’t actually feel bad when LL is a no-show AGAIN.

On the way to the show, I learn that I may have a ticket upgrade coming my way… I may be able to gain access to some house seats and move closer to the stage, due to friends calling in a few favors since “THE WIRK matters”… I’m flattered. A few minutes later, with the beauty of 3-way calling – even better news comes through that comped tickets are a possibility. Comps are extremely meaningful to THE WIRK since she’s got Vegas in her blood and is an absolute ticket shark….

I get to the Izod Center… Izod… Really?!? Izod… Whatever. That bldg will always be the Continental Airlines Arena… And that point was DRILLED home when I saw former, NJ Net, Cliff Robinson a few rows BEHIND me… 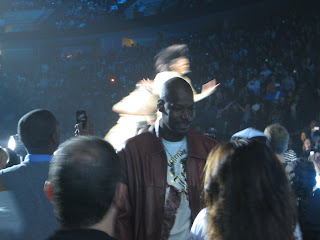 Janet on the walkway and Cliff Robinson behind me...
My blood and I are catching up in our seats – center floor section, 5 rows from the stage… While she and I are talking, she mentions she read my blog about Janet’s show on Wed. I asked if she ever saw Janet in concert before, and she says “No”. I reply that she should be fine bc my blog lowered her expectations and since she has nothing to compare this concert to… In her eyes, Janet’s more or less been offered a clean slate.

I look around the arena before the show starts… 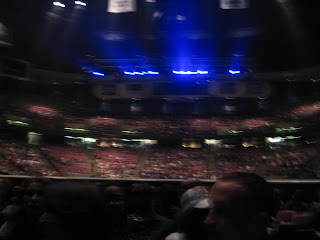 It's a bit blurry but you can see that there are plenty of open seats...
For those that don’t know how the bldg is set up – you should know that in addition to the floor seats, there is only a 1ower bowl and an upper bowl. Some arenas have more seating – this one doesn’t. Anyway, the upperbowl is only about ½ full and the lower bowl is close to being full. I’d say this crowd in Jersey is about 75% the size of the DC crowd – but even though this audience was smaller, I’d say Jersey got the better show. Incidentally, DC had better concession stand choices… Jersey only had hotdogs, cracker jack, pretzels, and cookies, etc. for food… Sad choices for a sad bldg. 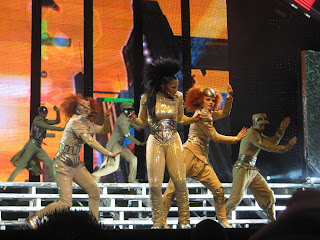 She looks slimmer this concert
Finally, the real Janet Jackson stood up… Janet tonight was noticeably more into the show. She seemed more comfortable. She was more sincere in her “acknowledgment” of people in the audience and with her dancers. She smiled more and “looked” happy. She danced harder – I can’t accuse her of half-stepping this show. She even looked like she slimmed down some (but seriously, how can you not).

I’m not sure what happened in the day and a half after Wednesday’s show – but the show was better. My only issue with that is that I think the tour is coming to an end shortly. I was checking out the back of one of the concert t-shirts and I think I counted about 4 more stops (but I have no idea how they’re handling the other cancelled shows).

Similarly to an athlete who’s been injured, maybe Janet just wasn’t in condition to perform on Wednesday – but athletes do gain their conditioning and get their wind back eventually. I’m not about to hit another Janet Jackson concert this tour. I’ve seen and heard enough. I’ve figured out which tracks she’s singing on and which ones she’s not.

For the most part she doesn’t sing during the tracks that begin with the graffiti video – but how would you really make the over-produced, yet hypnotically catchy “So Much Betta” sound good if you really sang it live?!? Also, that whole part of the set focuses on her and her background dancers’ dance numbers so just focus on the visuals.

Janet danced harder this show and in general the crowd loved her. I can’t figure out if people watched the concert more through the viewer of their cameras or with their real eyes. What did people do without digital cameras?!?! HAHA. I’m guilty of this and often take more pictures than necessary, because I want “perfect” pics to share with everyone that capture the magic of being there “live”… Even Cliff had his iphone out trying to get some shots…

It was challenging for me to focus on her singing, since I couldn’t shut myself up and the old lady behind me kept singing – but I wouldn’t really want it any other way. It’s a concert – not a recital – and if I wanted to really just hear the music and the singing – I’d stay home and just play the cd.

I did notice her mic wasn’t working when she was yapping into it and no sound came out. Plus when “Love Will Never Do Without You” came on, she started to mouth the words before the track kicked in.

Whatever. Everyone knows the 1st verse of that song is also over-produced and can’t be done live.

Oh – I need to mention that I hate the song “Black Cat”. Now that I got that off my chest, I feel better. I don’t need Janet doing rock. ‘Nuff said.

My stint following Janet is over at least for this tour… I’m not to the point of apathy, like I feel for Madonna, but I don’t think I’m getting what I want out of either of them anymore. As a result – I’m just gonna go back to focusing my time and energy on Tina Turner and see how many other dates and venues I can hit before she hangs it all up AGAIN… But I may just have converted my blood into a Janet fan for life… Soooo – at the end of the day, the way I see it – Janet still owes me…