Maxwell - Soulful, yet Light... Where Is The Brown Sugar Man? ~ Originally posted November 2009

The following intro was written by the Insideplaya, since I originally submitted this to him in November 2009.

The Wirk is an internationally known and locally accepted SAP software consultant, sports enthusiast, music lover, amateur photographer, occasional blogger and dear friend to the playa. It was her suggestion that influenced us to blog. She caught last night’s Maxwell gig in London, and has been gracious enough to bless us with her impressions of the show. She stayed up late and filed this post before leaving London for a weekend in Athens. We are grateful and appreciative, as well as indebted to her for taking the time to bring us a little closer to her world, and inspiring us to bring you closer to ours.

While in London WIRKING it, I’d heard that Maxwell would be in town. So, I decided to make some phone calls and check out the internet for more info and tickets. I mentioned it to the insideplaya, and he asked if I’d blog about the show if I went. When he asked, I told him at this rate, “all I’d have to blog about was the parking lot.” He sets me up with a contact at Creative Artists Agency and the next thing you know my tickets are in motion. Awesome!

I get to Brixton and I see it’s a smaller venue. I would expect that for Maxwell. The O2 Academy is similar to a theatre ~ for you, NY’ers think Hammerstein minus the Muppet seats in the wings. When I got to the ticket office the lady asked me if seats were OK, or if I wanted to stand. Um – it’s Maxwell. I want to sit. Plus it’s already 8:15 and the show was supposed to start at 8. Standing would be a nightmare now because all the diehard Maxwell fans have already taken their positions near the stage and let’s face it ~ Maxwell is not gonna play “Get To Know Ya” on REPEAT, so how much dancing is this girl really gonna do? 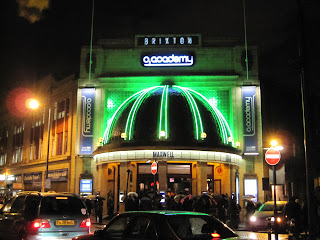 The O2 Academy
I get to my seat and wait… As the time passes, finally a man from London appears and he’s the lucky duck who gets to sit next to me during the show. His name is Sam. Now I know you just said “Sam” in your head as in “Samantha”. Well, if you did that just like I did, you’d be wrong. It’s Sam pronounced as “Psalm”. Fabulous and WHATEVER, but he was nice so we won’t cast any stones.

Psalm and I are ready for the show and Maxwell comes out. There’s a band. Ok. Horns, an organ, etc. The acoustics in the bldg are great and I am excited to hear the man’s voice live. Maxwell sings and it’s amazing. The sound is pure. His falsetto ~ unbelievable. It’s soulful, but LIGHT. It’s sexy, but reserved. It’s the kind of show you can take your mom to… It’s safe. 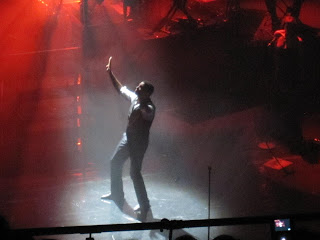 One of my favorite pics that I took at the show.
I could not wait to hear “Fortunate” and Maxwell did not disappoint. “Pretty Wings” was pretty cool. And “Lifetime” resonates in my head even though the show ended 2 hours ago. I recognize the talent and Maxwell’s voice is distinct to my ear. Music and sports are my life, and my ear is keen to sound. ‘This Woman’s Work” will never sound the same to me, now that I heard the first few notes sung LIVE . I like the range of Maxwell’s sound, it’s soothing and has some semblance of edge ~ but I feel like it lacks some grit. The kind of grit that resonates and make one feel it in their bones. The more I think about it the lines that resonate in my head are the lines that he has to go deeper to make. The whispers of “Fortunate” are nothing without the guttural sounds he makes when he sings lines such as “I’ve never sang a song with all my might”…

Maxwell is comfortable in his sexuality and tries to seduce the crowd with his moves, but he also seems to have a bit of a corny persona as he jumps around the stage… You’re not gonna see him do a huge dance number, and if you want choreography – go see Britney. I’d imagine Maxwell would be the kind of boyfriend who’d be all about backrubs and footrubs… The kind of man that Ralph Tresvant sung about in “Sensitivity”, except Maxwell is collecting checks…

All in all I liked the show, but the words, “soulful, yet light” stick in my head…. And the question, Psalm asked me has me thinking… Psalm asked me, “Whatever happened to D’Angelo?” I repeated the question I got from Psalm to the insideplaya and he didn’t seem surprised. “He knew you’d know,” The playa replied matter of factly. I guess, he’s right. When you’re passionate about things the way I am with music and sports, people feel that energy. That energy comes out of your mouth and through your eyes. Enough about that.

On any given Sunday, Maxwell is an opening act for D’Angelo… And if/when D’Angelo takes the stage ~ this girl isn’t gonna be sitting in the balcony.