I've always wanted to go to the "Land of Hello Kitty" and see what the hype is all about with regard to Macau.  So, I went.  When I landed in Hong Kong I decided that I'd head to Hong Kong Disneyland first.  I took a cab there from the airport.  DON'T DO THAT.  Take the train to Sunny"something" and then hop another train to the Park.  That's the best advice I can give you and no one will tell you to do that at the airport.  There's also a bus, but if you're like me or you know me at all - I don't really like public transportation to begin with so the word "bus" really isn't in my vocabulary.
I couldn't wait to check out HK Disneyland, since I'm a huge Disney fan.  I was told to plan to spend all day there.  Ummm, no.  I love Disney and all but it was just Me, Myself, and I and I do not need an entire day to enjoy the park.  I need 4-5 hours.  I got there and veered to the right towards Tomorrowland and rode Space Mountain twice in the span of 15 minutes.  If you're not familiar with the "single rider line" then you've probably never been to an amusement park in your life.  Seriously.  While all the families are waiting over an hour to ride together I whipped through the queue, like I owned the place.  Lucky for me, disapproving glances don't phase me at all.

I went around the park taking the compulsory pictures with Mickey Mouse, Minnie Mouse, and Goofy.  I skipped some strange looking bear and Winnie the Pooh.
I watched the Philharmagic show and sure enough there's no concept of "moving all the way down" the row so people can get into the theatre.  I rode "It's a Small World" and was surprised to see that there was an "underwater area" and some other regions that aren't really continent-specific.

I checked out the food, but I wasn't about to eat Korean squid, fishballs, or an egg puff.  I'm more of a "funnel cake, churro" girl.
After a fun time at the park, I hopped on the train and went to Victoria's Peak.  I took the Peak Tram up.  Luckily for me, I received a phone call while in line so that helped me as I waited.  The line for the tram is long and the climb up to the peak is STEEP.  Even when you board the tram, there's a lot of pushing and shoving for a seat, so you better not be shy.  If you want to sit, you better "box out" and be ready to move the minute the doors open up.
As I took the escalators up to the observation deck, I saw a cool souvenir shop making wax "figures" of people's hands.  I'd never seen anything like that before.  Pretty cool. 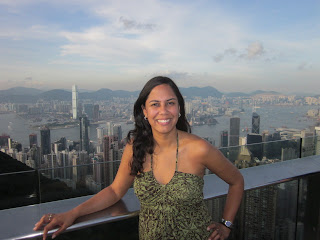 At the top of Victoria's Peak, I caught the sunset.  If you're smart and slightly lazy like me, I suggest grabbing a seat on the bench.  As the sunsets, more people will arrive, so if you want a picture above their heads, just stand on the bench whenever you feel like it.  Bench space is prime real estate.
After the sunset I took the train to the Temple Street Night Market.  After taking in the different vendors and overhearing some other tourist ask his friend, "Who buys this stuff?" I decided I wanted to test my negotiation skills and buy something.  I found a jewelry box frog and immediately cut the vendors price in half.  As she worked her way towards my price, I decided that I didn't even like the quality of what I was looking at so she went and pulled another one from a different person.  Satisfied with my choice of souvenir, I stayed true to my price and got it at the number I quoted.  Needless to say, I don't really negotiate...  I've always been a take it or leave it type person, so for me to negotiate, there really has to be a feeling that I'll be losing out if I don't compromise.  With all the items for sale and the hefty inventory - I knew I wouldn't lose. 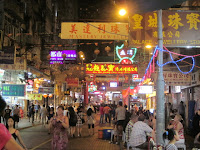 After the Night Street Market trip it was close to midnight and I decided I was ready to head to Macau.  I went to the Ferry Terminal and bought a ticket on the Cotai Jet to Macau.  The ferry is actually kinda nice and the ride is about 45 minutes to Macau.  After you clear immigration there's a nice shuttle bus that takes you to the Venetian.  Within about 10 minutes I walked into the Venetian ready to play, but first things first...  I needed a hotel room.

I forget the exchange rate to the HK Dollar, but was quoted a price that calculated to something reasonable.  I decided to walk away and think about it when they told me the room was accessible.  I don't like rooms like that.  I tend to get water everywhere in the shower and all when it's an accessible room so I avoid them.
I played a while and lost about 1500 HK Dollars.  It didn't take long with minimum blackjack bets of $300 and craps of $100.  I went back to the front desk and decided I'd take the room after all and sleep.  My luck started to change, since I ended up with a regular suite.
The rooms at the Venetian in Macau are the same as the room in the Las Vegas.  Sunken living room and large bathrooms.  Just what I needed to wash the grime of a days worth of touring HK off of me and rest up.
The following morning I woke up and went to gamble some more.  I won $4000 and paid my bill in cash.  I hopped the ferry by about 3PM and was back at the airport in the United Airlines lounge by about 6PM after hopping on the Airport Express in HK.  The Airport Express reminds me very much of the Heathrow Express in London.  Take it.
HK and Macau, I'll be back!
THE WIRK
Posted by THE WIRK at 7:08 AM