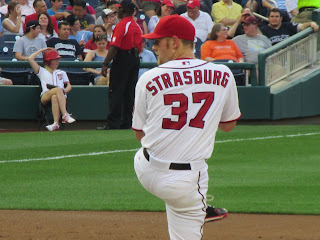 I had spent last weekend watching baseball in DC, and last night Stephen Strasburg was on the mound to strike out 10 batters and end the Washington Nationals' losing streak at four.  Last night's game was the 2nd game in the Tampa Bay Rays v Washington Nationals' series.  I was at Nationals Park, since my friend Cathy offered up her seats to the game.

Question: Who can't resist the opportunity to get two free tickets in good seats to go watch the Nationals baseball?!?!

Answer: Not this girl.  I watched the game comfortably behind the Nationals dugout (i.e right before 1st base).
As I mentioned, this was my fourth time at Washington Nationals Park in less than a week, and I was looking forward to seeing the Nationals rebound and get back to their winning ways.  For those of you that don't know, the Yankees swept the Nats over the weekend, and the Nats dropped another game against Tampa Bay on Tuesday.
Last night, I went to the ballpark sporting my Strasburg jersey and the man on the mound did not disappoint.  The Nationals came out on top with a score of 3 to 2. Stephen Strasburg was Player of the Game after striking out 10 batters with an ERA of 2.54. 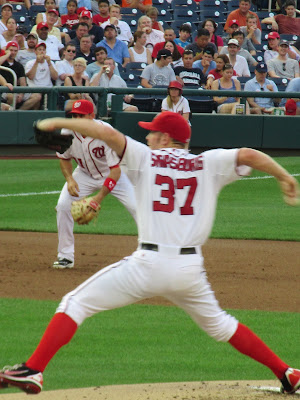 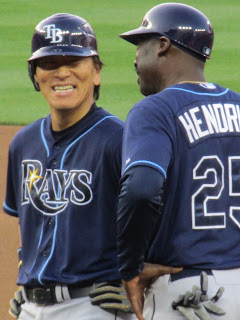 Last Valentine's Day I got a new camera and of course I brought it to the game. I absolutely love this camera. Hope you enjoy the pictures --- for this blog post I focused on Stephen Strasburg, Joel Peralta, and Hideki Matsui. 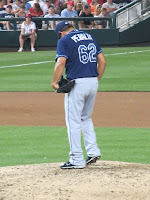 Peralta was interesting to me after the pine tar controversy from Tuesday night's game.  Can you see inside his glove?!?!  Neither can I...

After last night's game, the Washington Nationals are 39-27.  They still lead the NL East.

Personally, I'm more of an Americal League girl, but I have to admit that it's great to have such a fun team to watch here in DC.
Hope you enjoy my pictures!

THEWIRK
Posted by THE WIRK at 1:12 PM