I know this blog has been quiet lately, because I've been in and out of the country.  Now that I'm "back", lately I've been focusing more on baseball than basketball since I can't stand the thought of the LeBron James and the Miami Heat winning the 2012 NBA Championship...  Come on Oklahoma City Thunder!!!

OK, enough of that.  Back to the point of this post. 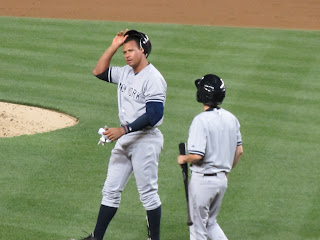 Did you know that the New York Yankees hadn't played the Washington Nationals in DC since June 2006?!?!  Those games were played at RFK Stadium.  No wonder people were buzzing...

I have a lot of friends in the DC area who are Yankees' fans and this series was all they could talk about.  When I was playing on the Nationals' ticketing website, I spotted a pair of good seats behind home plate slightly towards the 3rd base line...  Who doesn't want to be closer to A-Rod?!!?  Let's be real.  Alex Rodriguez is much better looking than Derek Jeter.  Needless to say, I grabbed the seats as fast as I could and called my Jetah-loving friend, Teri, to let her know we were golden! 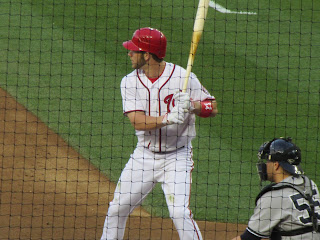 I went to the game, thinking that the Nats would play better than they did.  I was also excited to finally see Bryce Harper play.  Unfortunately, I can't remember him doing anything memorable at the game...

The AL East leading New York Yankees came to DC and beat the NL East Washington Nationals by a score of 7-2 on Friday night, and I was hooked.  After the game I went straight to the ticket window and picked up a ticket in the PNC Diamond Club for Saturday's afternoon game.  ****  If you haven't been to the Diamond Club yet, I think you should go.  It's a great place to watch a game and reasonably priced if you go there hungry and thirsty!

Hope you enjoy the pictures!
Posted by THE WIRK at 2:08 AM