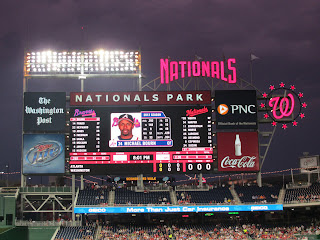 I caught the Atlanta Braves v Washington Nationals game on Monday August 20th.  I'd flown back from Singapore, thrown my bags in my apartment, and walked out the door to meet Kathy (aka the world's biggest Chipper Jones' fan) so we could head to the ballpark.

Comfortably seated about 4 rows behind the Braves' dugout, we noticed that they were postponing the start of the game for rain, so off to Ben's Chili Bowl we went.

As we waited by a condiments station for the rain to stop, we witnessed a man reach into the onions to put some on his hotdog.  COME ON, PEOPLE!  If you can't get the onions or any of the condiments to dispense, you DO NOT reach your hand into the ingredient(s).  So gross.


Once the rain stopped and before the start of the game, we settled back into the seats.  Quickly the Nats took a 4-1 lead at the end of the 1st.  Kathy didn't seem worried.  After the amazing comeback from a 0-9 deficit (i.e. at least I think that's what it was) in the last game we attended, I'm sure Braves' fans everywhere weren't scared.

Yes, the Braves rallied and the game was tied at 4 after 5 innings. 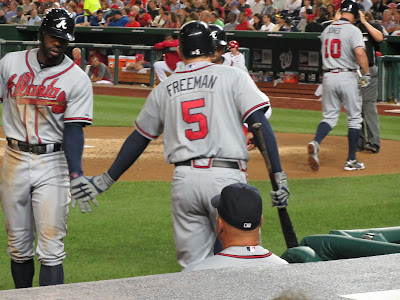 In what seemed like a marathon game that ended after midnight (i.e. on a night when I had just flown 24 hours) it seems like everyone was exhausted.  The Nats' bullpen was exhausted, and I was exhausted.  I would've closed my eyes a bit, if I could've, but the thought of getting pegged by a foul ball was enough to keep me up and aware.  ****  Incidentally, the man on my left, picked up a foul ball that was hit our way, after the people in the rows behind us couldn't snag it!

It took 13 innings, but Chad Tracy hit a single and Danny Espinosa scored to put the Nats up 5-4.  The Nats earned the victory, and I snagged some great pictures!