Tevin Campbell in Concert ~ COME BACK TO THE WORLD 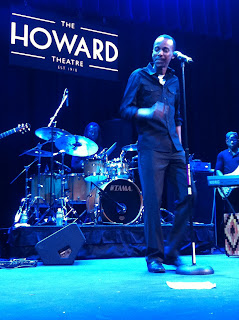 Tevin Campbell.  I know...  It's been ages since you've even thought about him, but (i.e. if you're like me) hearing a few bars of the intros to "Can We Talk" and "I'm Ready" on a radio station that plays the (a'hem) "older" hits, can take you back to your youth!

I'm a 90s R&B aficionado.  My addiction is serious.  Something about the romance, melody, and soul of that time appeals more to me than the complete lack of subtlety dripping in today's lyrics.  "Dripping", you ask?  Yes.  "Dripping" can be gross, and I think some of today's music is gross --- but that's not the point of this post.

Tevin Campbell hit the scene when about 25 years ago.  ****  Did I just type "25 years ago"?!!?  I'm getting old...  People of the R&B era, familiar with New Jack Swing artists (e.g. Tony, Toni, Tone and of course every artist who Teddy Riley ever produced) probably remember Tevin hitting the scene with "Round and Round".  Round and Round was produced, in 1990, by Prince and on Prince's Graffiti Bridge CD.  Remember the music video?  I do. 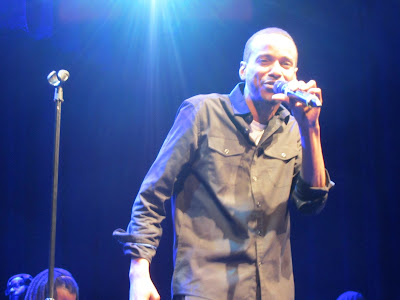 Tevin Campbell followed that track up with other memorable hits.  "Can We Talk", "I'm Ready", and "Tell Me What You Want Me To Do" are on a playlist with other tracks that I'll listen to over and over, when trying to wind down after a long day (i.e. on a plane and/or when I just have time to myself).  Those songs remind me of high school, when relationships were soooooooo dramatic --- and in hindsight overly romantic, completely stupid, and overly encompassing.  HA!  Yeah, that about sums it up... 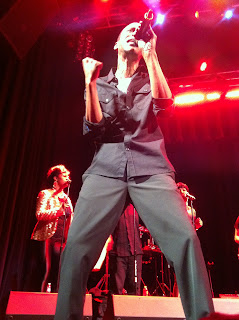 Anyway, for those of you wondering, Tevin can still sing.  He performed last night at The Howard Theatre.  The Howard Theatre is quickly becoming one of my favorite places to see a show.  It's an intimate venue where you can enjoy top talent and a "comforting" menu.  Music to your ears and food for your soul ---  that's The Howard Theatre.

Dressed in dark suit pants and a black shirt (i.e. with a white T-shirt peaking through), Tevin performed for over an hour and belted out his hits.  He also covered Stevie Wonder and Michael Jackson.

Towards the end of the show, he asked the crowd whether there was anyone out there who thought he wouldn't be able to sing anymore.  A few members of the audience were honest enough to raise their hands.  He just laughed, smiled, and said he loves to prove them wrong.

I was one person away from the stage.  I could actually touch the stage, if I wanted to.  I can tell you that Tevin Campbell's smile is big.  He genuinely seemed happy and surprised to see a packed house.  People showed up to see him sing.  People sang their hearts out along with him.  Yes, we all have Google and may/not have heard about his issues in the past, but last night no one cared.  It was a friendly crowd.

Tevin said he's working on new material, and the crowd cheered at the news.  I look forward to new hits from a very talented man.

Come Back to the World, Tevin!  Your fans miss you.

Email ThisBlogThis!Share to TwitterShare to FacebookShare to Pinterest
Labels: Come Back to the World, concert, Howard Theatre, New Jack Swing, Prince, Round and Round, Tevin Campbell, The Wirk