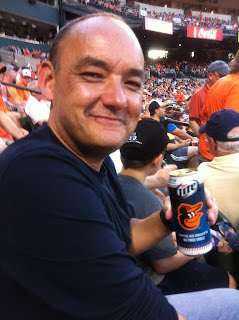 My husband is from the UK, so he's impressionable when it comes to US sports.  I was able to spark his love of baseball (i.e. at Orioles Park in Baltimore last year), so it was a no-brainer that I needed to take him to watch Miguel Cabrera and Prince Fielder of the Detroit Tigers take on the Baltimore Orioles. 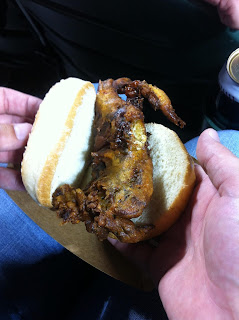 It was a gorgeous Friday night for a baseball game and as usual we couldn't help but indulge in the food on the concourse.  I had the compulsory funnel cake and cheesesteak sandwich, and even had a bit of his soft crab sandwich from Old Bay Seafood.  I'm originally from Southwestern Ohio.  When you say "seafood", I think of Red Lobster and I get excited.  ****  If you say you don't like Red Lobster, I think you're lying.  It's good.  Have you seen this sandwich?  If you look closely, you can actually see the crab's shape.  After some coaxing, I reluctantly took a small bite of his sandwich.  It wasn't for me, but he enjoyed it very much. 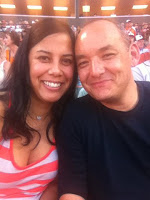 We were behind home plate and to our surprise there were plenty of Detroit Tigers fans around us.  Seeing as though my husband and I really didn't have a dog in the fight, we appreciated the offense from both squads.

The flow of the game seemed to favor the Detroit Tigers, but the Baltimore Orioles' bats had been HOT in previous games (i.e. which were unfortunately against the Washington Nationals) so I knew that you should never count the O's out.

I expected the Orioles to rally, but I NEVER expected to see Chris Dickerson hit a walk-off 3 run homerun in the bottom of the 9th! 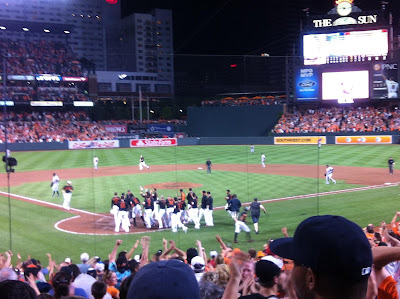 Moments like that are exactly why true fans don't leave the park until the final out is called.  Orioles win!!!