Table games are still a novelty for the people in the DC/VA/MD area and being that I like to play craps I was curious to see what Charles Town, WV had to offer.  There's a Hollywood Casino in Charles Town.  I'm actually familiar with Hollywood Casino since there's one in Indiana that I've visited previously.  Picture a Regal Cinemas or movie multiplex sans movies theater but add in the lights and sounds of slots machines and now table games. 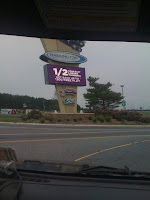 I'd recently visited a casino in Harrington, DE.   Here is the URL: http://www.harringtonraceway.com/ for Harrington Raceway & Casino.   This particular casino only had 1 craps table and if I remember correctly, the table minimum was $15.  That casino offered 3X, 4X, and 5X odds.  I wasn't particularly fond of my experience, but at least I left even.  With only one craps table it's either hot or not and there are no other tables to jump to when the dice are ice cold.  I'm not exactly the most mobile person, but I do like having options. 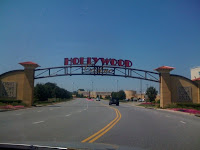 Hollywood Casino is probably the shortest drive away and I was able to convince my friend, Pun, to go with me for a quick Saturday, day trip to check it out.  Here is the URL:  http://www.hollywoodcasinocharlestown.com/.  Pun likes to play craps also so it was a perfect match.  It took about 90 minutes to get to Charles Town, WV.  He drove and I just checked out the scenery.  ****  FYI - There's not much to see...
Upon arrival to Hollywood Casino Pun and I bee-lined for the table games.  After hearing horror stories about the high table minimums, we were pleased to see that the casino offered 4 craps tables and two each with minimums of $25 and $10.  Three of the 4 tables were crowded and the $10 table I wanted to play appeared to be at capacity.
When I approached the table to further investigate who had chips in their rack and who was there just wasting space, I noticed a guy about my age and height just standing there.  He was leaning against the table and following the action, but wasn't betting.  I made eye contact with the dealer and asked if the space was open and he nodded.  Then I tapped the guy who had no chips in his rack and asked if he was playing.  "I'm learning," was his reply.  I told him I wanted to play and asked him to move back.  He replied by pointing to another table (i.e. a half empty $25 table) and telling me that I could go play over there.  I informed him that I didn't want to play the $25 table, and that I wanted to play where he was standing.  The man to his right could see that the guy wasn't moving and politely moved over so I could get in.  Within 5 rolls of the dice, I'd boxed the kid out, and he was standing behind me.

****  Here's your first lesson: If you're not playing, you need to move so someone else can gamble.  This rule is for slots and all table games.  You can learn online, by reading a book, or standing behind someone.

****  Here's your second lesson:  I'll approach you politely and tell you what I want, but if you don't listen, I'm not afraid to tell you how it is.  Very little scares me, when I know I'm in the "right".

At the craps table I noticed that no one could make their points.  Awesome.  I'm not a "don't pass" person, so I just picked up and left.  I headed over to the roulette table, and Pun hit the slots.  Roulette.  Simple game, right?  Well I guess to some, not really.  There was a young couple sitting at the $15 min table.  Here are two examples of the conversations that I overheard.

Girl:  Are there more even numbers than odd numbers?
****  I learned today from my friend Sherry that 0 is actually an even number.  Regardless, if you bet "even", you're still not going to get paid if 0 hits.

After getting bored with roulette and Pun wanted a break from slots we hit the buffet.  I like buffets.  I'm not ashamed to admit it.  2 buffets cost about $40.  There's nothing special on the buffet, but my expectations were reasonable.  I wasn't expecting the spread at the Bellagio.  There were no crab legs and no cocktail shrimp, but there was fried shrimp and a variety of other choices.

After eating Pun ran into some guys he knew and I went back to the craps table.  I made $100.  It doesn't sound like much, but you try making any real money with such low odds offered.  One thing I don't enjoy about being one of the only (i.e if not the only) girl at the craps table is that there's always a guy who thinks he knows how to play better than me.  "Better" is a subjective term.  Just because I don't spread my bets and place numbers doesn't mean I don't know how to.  In fact, I usually don't because I've been standing at the table and I know that it's cold so I don't feel like chasing my money and throwing it out there.

Sure enough, I was there and a man rolled up next to me with $75 in $20s, $5s, and $1s.  Seriously?!?!  Anyway, the man got his change and then proceeded to tell me that I could make more money by making place bets.  I simply said, "The point hasn't even been set, so what numbers are you even going to place?"  He looked confused.  "You play your chips, and I'll play mine." was what I followed up with.  Sure enough 2 rolls after the point was set the shooter crapped out.  On the outside I was smiling.  Inside I was laughing...

At about 6PM, Pun and I decided it was over.  There really was nothing else I wanted to see.

Moral of the story:  Just drive to Atlantic City or fly to Las Vegas.