I was born an Ohioan, but I grew up an old school Lakers fan.  However, as I moved towards NE Ohio, I watched more and more Cleveland Cavaliers games and became acclimated to their .400-.500 brand of basketball.  I used to see Mike Fratello in Little Italy.  I used to catch Jim Chones at the Fairlawn T.G.I. Fridays.  I would go to Richfield Coliseum to see Magic Johnson, Dominique Wilkins, and Patrick Ewing.  I'd always be over towards the visiting team tunnel.  I was young, and didn't really appreciate the people and the heart and talent that the Cavs had until 1998.

It was 1996 when I heard the name "Zydrunas Ilgauskas" for the first time.

I know Zydrunas' love for the Cleveland Cavaliers runs deep.  His love of basketball is immeasurable.  The man would be lost without it in his life.  I can't even imagine how he's going to feel in a Miami Heat jersey...  I do know that he is nothing but professional in his commitment to the game and his career.  The most offensive thing you can do to him is question his heart.

I'm not surprised by the class in his full-page newspaper ad (i.e. seen below from the Cleveland Plain Dealer).  I'm proud. 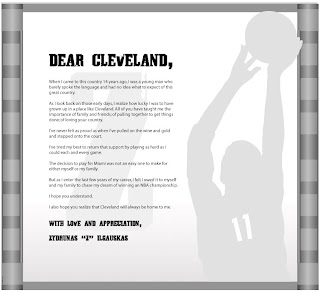