I was in the US for Labor Day and that meant that I could attend Jay-Z's Made in America Festival in Philadelphia.  The MIA Festival was a 2-day festival (i.e. Saturday and Sunday) and with Labor Day off, you know I was planning on making the drive up/over to Philly to check out the festival.  I bought a 2-day VIP pass, which gave me a free T-shirt, a souvenir ticket, a bottle of water, a special VIP tent, and a special VIP viewing area.  For someone like me, this was THE PERFECT way to go.  The VIP viewing area had its own bathrooms, but the tent had better bathroom facilities and it offered a buffet for $20.  There were also bars for your convenience.  ****  The Platinum VIP tent had open bar, but for someone like me who attends these festivals by myself at times, I don't usually drink.

There were two stages and a tent where DJs spun (i.e. I think).  I stayed in the VIP viewing area for 99% of the day, and only listened to the other stage and watched the screen, when I was interested.  Luckily for me, I could see the screen from my makeshift perch.  The way the barricades were set up, there was a line of seats in the VIP area, so about 20 of us were able to sit, without having to do so on the ground.

Day 1 of the festival was a long one, but it was worth it to see Jay-Z perform, especially with special guest star Kanye West.  I'm a huge Kanye West fan, and having Kanye come out on stage was a dream come true for this fan. 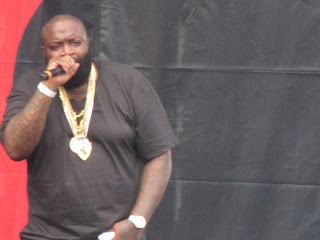 My day started out with Rick Ross and MMG.  For those of you that don't know, MMG, stands for Maybach Music Group. 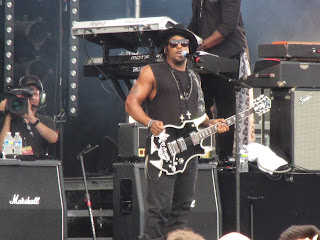 After MMG, I saw D'Angelo again.  ****  I'd seen D'Angelo the week prior when he was in concert with Mary J. Blige.  D'Angelo's performance was shorter than the performance the week prior, but it was about the same with regard to tone and style.  The guy to my left said it perfectly, when he said, D'Angelo sounded like a mix of Prince and James Brown.

After D'Angelo, Passion Pit was on the main stage, and they definitely warmed the crowd up for Jay-Z.  Inflatable beach balls bounced around the general admission section (i.e. directly in front of the stage) and the energy of the crowd went up. 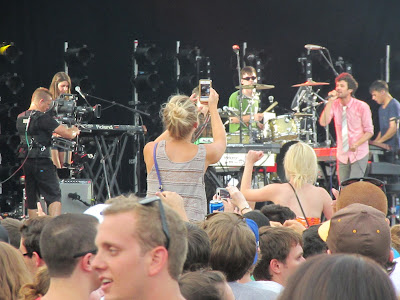 Each act, earlier in the day, was on for about an hour, but Jay-Z had 90 minutes.  If you want to see Jay-Z rock a show, by himself, for more than 90 minutes I suggest that you see him in concert.  This was a festival and with guests like Common and Kanye, etc. Jay-Z definitely shared his time on stage. 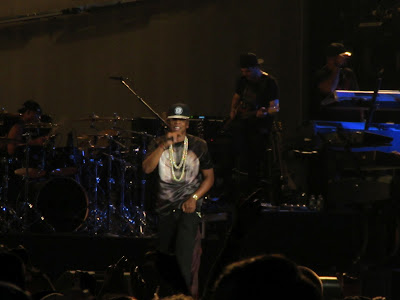 All in all, I had a great time on day 1 and couldn't wait for Pearl Jam on Day 2.

Oh, and for those of you that are curious, OF COURSE Kanye and Jay-Z ended the show "in Paris".