My friend, Teri, is a huge New York Yankees fan, and she'd never been to Oriole Park at Camden Yards (i.e. until this weekend).  With the race to first place in the AL East coming down to the wire, I talked her into going with me to Saturday's Yankees v Orioles game.  She didn't need much convincing, once I planted the idea and before you knew it, we had a couple of tickets to the game!

Saturday night was a great ball game.  Covered from the rain in section 49, we watched the Yankees and the Orioles battle. 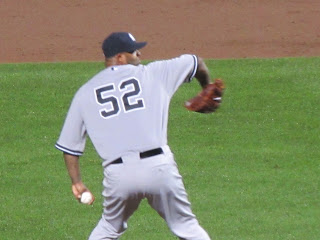 We watched CC Sabathia serve up meatballs and Orioles hit homeruns.  We also saw CC hit Nick Markakis with a pitch.  It's going to be a while before Orioles fans see Markakis at bat.  Reports that I read say that, Markakis is out for six weeks. 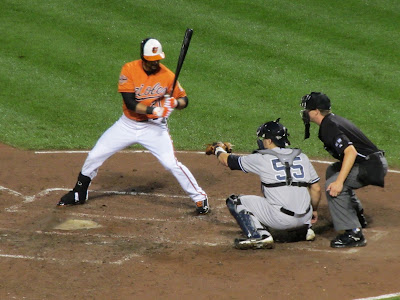 It was a great game, but the ending was very unfortunate.

As the Yankees were rallying from a 3-5 deficit in the 9th inning, I saw the supposed "double play" that ended the inning and the game.  It didn't take a genius to see that Mark Teixeira was safe.  Umpire Jerry Meals made a bad call, and I agree with Teixeira.  My guess is that Meals either wanted to go home or just got ahead of himself.  Either way, it was what it was, and the game was over. 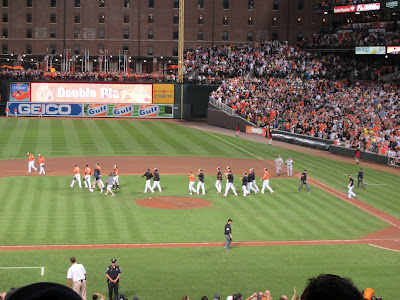 If I was Teixeira, you wouldn't have been able to pull me off the base.  How frustrating...  That's baseball, and that's life.

The Baltimore Orioles won the game 5-4, and as a result both teams are tied for the lead in the AL East.