View from a suite of the pre-game at Philips Arena, Celtics v Hawks ~ April 2008

Ricky lives in Atlanta, where I used to reside, and I still have an affinity for the city and many friends that still live there. I've been a Atlanta Hawks fan since the days of Dominique Wilkins (aka The Human Highlight Film). Once, while I was in college, I bought a single standing room only ticket so I could go to Richfield Colosseum and see Dominique fly in person. Standing room only are three words that never scared me, because there are people that don't show up for events that they have tickets to, all the time! How wasteful, and in the words of my father, not very "cost effective". At the game I found a father-daughter combo to sit with and they were extremely welcoming once they found out I was by myself. With my eyes glued to the court, I told the father-daughter combo about a trip I took to the Crystal Palace in the Bahamas.

I was in college and on vacation with my dad. Whenever I had a long weekend, it seemed like we were in the Bahamas. Lucky me! Anyway, my dad and I were having lunch at the pool bar and I found myself staring at a man. Staring. I kept staring. Don't worry, he couldn't tell I was looking at him that hard ~ but I was determined to figure out who I was looking at. The man was sitting with a beautiful lady and also enjoying his lunch. My dad noticed I was distracted and asked me what my problem was. I kinda pointed and told him I knew that guy... My dad nonchalantly responded, "Of course you know who that is. He's one of your favorites, Dominique Wilkins."

HOLY CRAP! My dad was right! My internal voice starts screaming at me... Why am I sitting with my dad eating, when I can go meet Dominique?!?! OK ~ must be cool, I tell myself. I leap off my stool, head to my beach chair, and grab an index card and my camera and walk back to lunch with my dad. Index card?!?! Yes, I said index card. What do you expect? I was in COLLEGE. I was studying a little bit on the beach. Back at the beach bar, I wait. and I wait some more. It looks like Dominique and his lady are finished with lunch and getting ready to go back in. Now's my chance. Off my stool and over to the 2 of them I head. I tap him on the shoulder, explain that I'm a huge fan and his lady just sits patiently. He's kind enough to sign my index card and pose for a picture. I stll have both at my mom's house in a photo album. For me, those two items are priceless! As I walked away, I noticed Dominique was talking to another man, and I recognized him as Gerald Wilkins. I let that opportunity pass, because I did not care as much.

It's great to see Dominique at Philips Arena and to see the current success of the Hawks.

Coach Mike Woodson is a class act and one of the few people on the short list of folks who came to the house to check on Zydrunas post-surgery. I'm happy to see him successful after his years in Cleveland as Randy Wittman's assistant. Woody has always been very welcoming to me when I come to Atlanta and it's always great to see a friendly face. I call him once or twice a year and wish him luck, congratulate him on his sucess, and let him know if/when I'm coming to town. One night at Philips Arena, I ran into an old friend, Larry Nance at a Hawks game He was in town, and he noticed the Hawks were home so decided to call Coach Woodson and check out the Hawks. It's great to see the Hawks play as well as the have been, and I'm thrilled that Dominique Wilkins is still a part of the franchise and Woody is leading the charge. 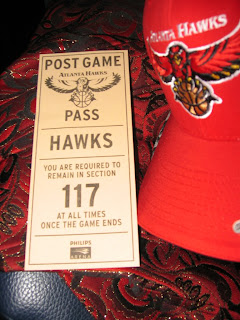 Post game passes let me catch up with friends, when they're finished working. 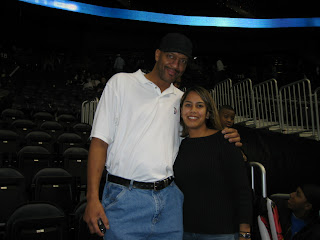