If you ask the average person, they'd tell you football started 16 or so weeks ago. If you ask me, I'd tell you that football season started last Saturday... Athletes practice for the big game... I also prepare, even though I'll never take a snap or catch a pass of my own... On Monday night, I was at trivia watching the ESPN crawl... I noticed that the Eagles were playing the Cowboys on Saturday night. The wheels in my head start turning... I want to go to Dallas. Some people have a goal to visit all the MLB ballparks... I dream bigger. It's been a goal of mine to go to a sporting event at every professional venue for baseball, basketball, and football. I will go to hockey games at different sites if the opportunity presents itself, but I'm not about to add it to the list, just yet... After my visit to the new Cowboys stadium, I've been to 57 professional sporting venues. 57. I should've kept a tally on how much this goal has cost me, but I think it'd make me throw up, and I can't imagine the reaction from family and friends so the numbers will not be calculated.

I go to bed on Monday night and tell myself I need to look at flights early on Tuesday. Tuesday morning I wake up and hit Orbitz. To my surprise it appears that USAir wants me to go to Dallas also... They're offering Dallas as one of their last-minute e-saver destinations. For under $220, I can book a round trip ticket and the flight times are PERFECT for an overnight trip to Dallas. Next thing to look at is, game tickets... Must find out whether game tickets are cost-prohibitive or doable... A quick look at some ticket resale sites, tells me that I can commit to a trip to Dallas and go to the game. AWESOME. I think about things a little bit more. I wonder if I can get a Cowboys fan to come with me to Dallas and go to the game.

I jump on facebook and look for my friend, Pat. He's a diehard Cowboys fan, and I bet I can convince him to make the trip. Sure enough he's online. I tell him about the flight prices. He looks for himself. I tell him we can get tickets on stubhub. He says he's never used it. I tell him I'll take care of it, if he just says "YES". He books his flight. We're half way to Dallas in my head! Woohoo. Now for game tickets. Like I said, Pat is a diehard Cowboys fan and I'm a ticket snob. We both go to stubhub and scan for tickets. He's kind enough to offer to sit in the endzone. (For those that don't know, end zone seats are generally cheaper than sideline). I scowl audibly. I'm not flying to Dallas to sit in the endzone. We get home team sideline tickets, on the 20, 13 rows up. I'm BEYOND thrilled. It's a done deal. We're going to Dallas.

Saturday early afternoon I swoop and pick Pat up in the cab and off to the airport we go. Arrive in Dallas, and we get picked up by my cousin's family. Off to lunch for some Texas BBQ. My cousin gets to know Pat. I think he thinks we're a couple. Who cares. I'm not going to correct him. It's not worth it, and I'm sure his kids won't remember Pat when they're older, so he won't have to respond to inquiries about where's, "Uncle Pat". Lol. I'd be willing to bet $10 though, that I get asked about Pat at my cousin's wedding in March ~ but I digress... 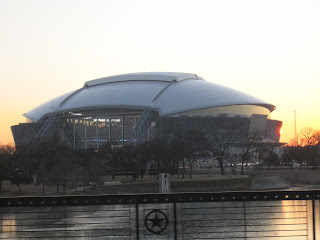 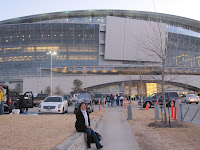 My cousin drops Pat and I off at the stadium. When we walked in, we were handed a rally towel. I'm a sucker for free stuff. We cruise the concourse and get a feel for the stadium. Wow. This stadium is like no other. Pat described it as a convention center. That's actually not a bad analogy... 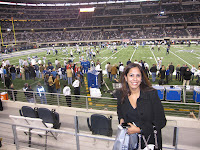 We hit the pro-shop, because we need to get Cowboys gear. Purchasing a home team hat is a compulsory activity when I hit a new venue. While looking at all the Cowboys gear (and singing along to De La Soul's Me, Myself, and I, which is booming through the speakers) I pick my hat and head for the check out line. In line I see a 4 pack of bobbleheads for $20 ~ best souvenir ever because I don't have to buy them a la carte.
After a quick walk around the concourse, it's off to the seats we go... Eyes wide open I stare at all the activity around me. Cheerleaders, dancers, fire, players, lights, video, etc. are everywhere. Lights, camera, and so much action. They could easily name this stadium "Attention Deficit Arena". I have no idea where I should be looking, but I know I can't take my eyes off the screen over head... The monster screen goes from the 20 to the 20, and the picture is so vivid! 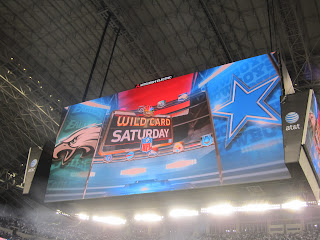 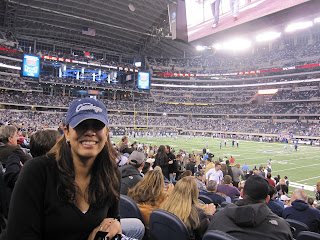 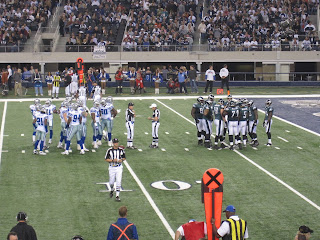 Game On. Cowboys win the coin toss. Cowboys already win in my book. After a few plays it looks like it's going to be a close game. I didn't come to Dallas to get stressed out. After a while, the Eagles (or whoever those people were in green) start to crumble and it begins to look like a barn burner! The group of 4 old guys in front of me are the happiest little boys in the world! Pat has died and gone to heaven. Everyone is smiling from ear to ear and slapping each other high-five after every great play. I'm not sure if it's the South, the fact that they're indoors, or that the Cowboys were winning ~ but all those people were very happy. The new Cowboys stadium felt like Disney World.


I'm taking it all in and surveying the people around me. I look 2 rows ahead of me and notice someone. I know basketball. I know the physique of a basketball player and I'd be willing to bet I know the guy I'm staring at. I look at his profile a little harder and then he sits down. I look at the back of his neck. I see the word "Franchise". I guarantee there may only be a handful of people that know who he is and I'm in that handful. I put it together. It's Steve Francis. It makes sense since he played in Houston and who else would have that on the back of his neck. I think to tap him and ask him if he has Bobby Sura's number in his phone. I'd be willing to bet he does. It's not the time or place. I'd have to talk over a row of people and if I need to find Bob, it's not that difficult for me to find my old friend. Steve and I high-five several times during the game... I'd be willing to bet, even he'd be surprised I figured out who he was! 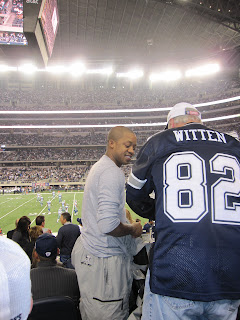 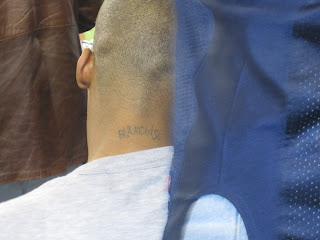 Do you know who this is? I do! I do!!! :-P
Cowboys blew out the Eagles. We get a drink at a stadium bar after the game, and the stadium is still bustling. Very cool! We watch the postgame and I just people watch. People are throwing footballs on the concourse and having a great time. 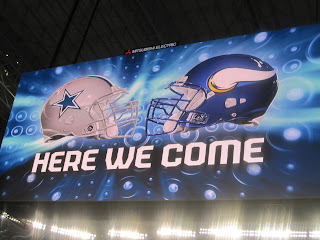 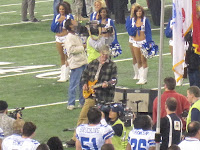 By the way, Ted Nugent did the National Anthem. I guess that makes sense because we're in Texas.

One thing is for sure ~ they were dead on, when they said "Don't mess with Texas".


After the game, Pat and I head to Sherlock's for a drinks... Already the gears in my head are turning... I see a guy in Colts gear and I have to tell him I'm a Colts fan. He's visibly confused and tries to take my Cowboys hat off of my head. I stop him because my hair is crazy under there. He tell me if I'm a Colts fan, I need to "be proud". Huh!?!?!? I think to myself, I'll show you proud and immediately try to plan my trip to Indianapolis...