When I was at lunch on Friday 2 people called me.  One was my girl, and she and I were finalizing plans for Saturday's Duke V Georgetown game.  The other was my friend, Bryan.  Bryan never calls me.  I didn't even know he had my phone number.  Maybe he pulled it off of facebook, maybe I gave it to him ages ago.  Who knows.  All I know is that he was calling me, but I was at lunch and not picking up.  I think I'm semi-psychic.  At lunch, I was trying to figure out why Bryan was calling, and sure enough my suspicions were confirmed when I checked my voicemails on Saturday morning.

Bryan is a sports fan also and he loves the Capitals and sure enough, he was calling to see if I wanted to go to the hockey game on Friday night.  I knew it.  That's why I didn't answer.  I already had "plans" for Friday and I didn't want to have to push myself to be anywhere at any particular time.

When people contact me (especially if they're calling me) who don't normally contact me ~ I know why they're getting in touch.  Usually, it's because they have an extra ticket to something.  Lately, I've been lucky enough to get these calls more frequently.  On Saturday afternoon around 5:00PM I was driving my friend back to her car and we'd decided we were going to see the movie The Blindside, instead of taking in the Knicks v Wizards game.  Sure enough in the parking deck, I get a text and it's Bryan and this time he's offering me a free ticket to the same Knicks v Wiz game I'd just decided to pass on.  @!#$%#$#!@#$.  I guess I'm meant to go to this game, since it was the 2 time someone offered me a seat.

I call Bryan for the details and talk to my friend, who's pulled over, so I can work out the plan.  We decide to pass on the movie and I tell Bryan that I'm IN for the game.  Time to go home and drop off my car...

Bryan picks me up around 7.  We get there close to tip off since everyone is driving slow and the roads aren't cleared.  He decided to park by the arena and tells me he used to valet at Rosa Mexicano also!  LOL.  See.  I'm not the only one!!!!!  Parking is $25 and we'll pay at the end.

We go to will call.  He goes to pick up our tickets, and I hit the sales window to ask about hockey tickets for Sunday.  Only singles are available.  It's not that important to me, so I pass.  Bryan hands me the basketball tickets, that he's been gifted from a friend, and I read Section 121, Row A.  Yep.  I know EXACTLY where we are sitting.  We're 4 rows (i.e. it goes AA, BB, CC, and then A) behind the Knicks bench.  That's where I sat when the Cavs came to town during the Playoffs...  Section 121 is my friend.

OK - so we're there for the Knicks and the Wizards.  I have no idea what their team records are, but basically we're there to watch CRAP v CRAP.  Hmmm ~ at least they're evenly matched.  I like Earl Boykins, and Earl plays for the Wizards.  I remember when he was in Cleveland and talking to my ex in the lobby at Reserve Square.  I didn't know who Earl was, and I thought he was just a fan.  After the convo, I asked my ex who it was he that was talking to, and when he said Earl ~ I was floored.  Man....  They weren't kdding.  Earl is short.  Thank goodness he played for the Cavs when he did then, because I have a pair or 2 of Cavs sweatpants and they're Earl-sized so they "fit".  Kinda....

Cavs...  Now that reminds me, that I need to call the Wizards and leave a message for Randy Wittman.  Randy did a stint as head coach in Cleveland, and it wouldn't hurt to reintroduce myself and let him know that I'm here.  His wife, Kathy, is great and better late than never to "welcome" them to DC.

Knicks.  I used to be a huge Knicks fan.  In college, I was desperate to have Ewing sign my Knicks pennant.  Yeah, I said college.  I had Charles Oakley, Hubert Davis, etc. sign that pennant.  Herb Williams even signed the thing TWICE.  TWICE!  Are you serious?  TWICE?!?!  I just depreciated my own pennant.  #@!@#@!#@!#@!  Ewing never signed it, and 2 Herb Williams' autographs do NOT equal a EWING.  At first from behind the Knick bench I stare daggers at Herb.  Then I let up.  It's not HIS fault I was dumb enough to give him the pennant 2 different times. 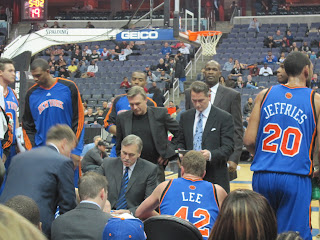 Whatcha looking at Herb?  Yeah, I see you...
Oh here's a story for you.  So, I was in college and leaning over the rail to the tunnels to have the Knicks sign my pennant after their pregame warm-ups.  It was at Richfield Colisseum.  Some parent asked me if his/her (I don't remember if it was a mom/dad) could get in front of me to have a better chance of getting an autograph.  My response was simple,  "No.  I'm sorry.  I can't do it.  Your kid is young and has many more chances to get the autograph.  My days are numbered."  It was what it was, and if that parent wanted the kid to get the autograph, then he/she should've gotten there earlier.  Life's not fair kid.  Sorry.

So game starts, and my friend and I talk about the line.  The line was either 1.5 or 2 or 2.5, but he said that NY was favored.  That made no sense to me.  I take the Wizards and he takes the Knicks.  Loser pays for parking.  Wizards win easily, and therefore I win.  Bryan pays for parking. 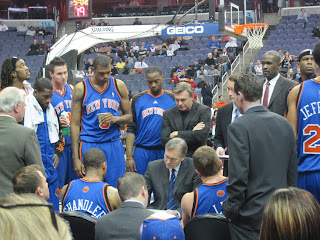 D'Antoni is either drawing up plays or the Knicks are playing Pictionary...  I'm not sure...
So all in all the game was a little boring, but I can have fun doing just about anything.  I had Bryan sitting to my right, and we had the chance to chat it up.  The company was good. 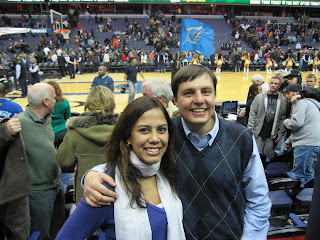 With Bryan after the game
The girl to my left was yelling and cheering for the Knicks, and she was obviously oblivious as to the score.  I swear my left ear was bleeding.  Mike Miller was on fire, and David Lee also played well.  Larry Hughes can't even be bothered to get into the huddle during time outs.  I'm reminded that Duhon plays for the Knicks.  I wondered if he was at the Duke game earlier in the day.  Nate Robinson has 2 or 3 open breaks, and the crowd audibly held their collective breath (each time he broke free) as they eagerly anticipated a dunk...  Nate didn't deliver on the monster dunk.  I debated on if I wanted a refund. 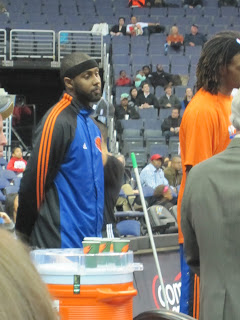 Yeah, Larry...  We, in the crowd, really don't care either...
I spent most of the game trying to get the best shot of Earl and Nate I could.  They look so cute compared to their larger, taller teammates!  I know that's a lame statement, but seriously.  It just shows you than anyone can do anything as long as he/she works hard enough ~ and that's a lesson we ALL need to learn. 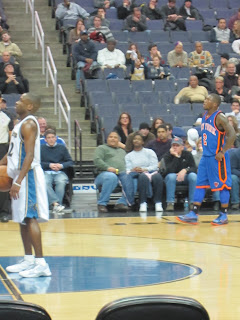 As I typed this,  I got a text from someone in the Cleveland...  There are 5 home games in the next 9 days.  Interesting...  BUT, that's not gonna work.  I just booked my flight earlier today for Miami to see my brother and be on the ground for the Super Bowl festivities...  Now...  I just need to sell a kidney to get a ticket to the game...  GO COLTS!!!!