Last night, I took a break on sports and decided to hit a concert.  Mariah Carey was in town, and I wanted to check out the show.  I'd originally bought tickets to see her at the Borgata in Atlantic City on January 2nd, but I decided I was too tired to make the drive.  Fortunately, I ended up making a tidy little profit when I decided to unload them on stubhub.com.

Mariah Carey.  She'll never be known for her choreography.  Sure, she can step to an 8 count and hold her own when in a formation, but she doesn't need to dance.  She has THAT voice.  The range is distinctive.  A tuned ear can determine an artist when it hears it.  The grisly Tina Turner, the falsetto of Maxwell, the British accent for Michigan's own Madonna (hahaha).  Mariah has a voice that dogs can hear when humans can't.  The high frequecy can probably open garage doors without hands or a remote.  There is no question ~ Mariah can sing.  She doesn't need Britney's pole or a hot outfit to pull her fans to the show, and if you ask me, she knows it.

So, last night was the State of the Union address, but about 1500 of us gathered at DAR Constitution Hall to see MC belt out her hits.  On her last stop to DC she played the Verizon Center.  She went from 20000 peoplel to 10% of that last night.  I find that interesting.  I also think it's interesting that there was very little promotion done for this tour.  I think it's a mistake, especially since she said she's dropping a new box set/greatest hit cd soon.  She mentioned this numerous times during the show...  That's Mariah, if you've seen her before she'll plug her new CDs and the projects of her inner circle.  She's a good friend, because I didn't hear anyone else plugging Da Brat's cd when it came out YEARS ago.

Anyway, Constitution Hall.  I waited outside for my friend Teri to show.  The time outside gave me a moment to take in the crowd for the show.  All kinds of people were showing up ~ old, young, black, white, gay, and straight ~ a virtual melting pot of folks had tickets to her show.  Notice I said they all "had tickets to the show".  No one was outside trying to make a deal, which frustrated the scalpers on the street.  Oh well ~ that's the nature of the scalping game and of life.  It's all supply and demand...  One scalper was trying to unload $500 tickets...  OUCH!

It's already 8PM and ticket time is 7:30.  I'm still waiting on my friend, but I know we're still good, since there's no way Mariah goes on stage on time.  She's a diva.  And from the looks of her while she was performing ~ I guarantee she was EATING AND DRINKING until about 8:15.

Teri shows up and we take our seats after getting drinks.  We take our seats and they're awesome.  Row R is what it says on the ticket, but it may as well be row J because it looks like we're 10 rows away from the stage.  I'm impressed with the quality of the last minute ticket.  We have about 15 mins to kill and I show Teri this blog site, and she indulges me enough to read it.  That's me ~ I self-promote. 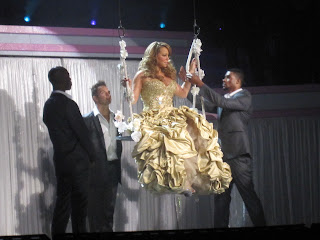 Close to 8:30 Teri goes for another drink and then of course, the show starts. Mariah is being lowered down on some swing and she's wearing some a gold dress with some sort of puffy skirt.  Think "Gone With the Wind".  First impression  ~ Wow.  Mariah is thick.  Teri whispers in my ear, "We saw Fat Janet (i.e. a reference to when we saw Janet Jackson in concert a year or so ago) and now we have Fat Mariah".  I cannot help but laugh!  Are you kidding me?  I don't have to perform and sing in front of a crowd, and I still watch my food intake since I know I can be incredibly lazy at times...  Then again, I have no boyfriend ~ and they say that love makes you fat ~ sooooooo, my theory is MC is CRAZY in LOVE with Nick Cannon.  Good for her and good for all the take-out/dine-in/delivery eateries near them.

MC does a couple of numbers and then the lower part of her skirt comes off or detaches and the skirt is shorter.  2 words ~ thunder thighs ~ come to mind.  Um.  Wow.  I know she doesn't play soccer, so I don't really get it.  Another image comes to mind....  Have you seen the movie Fantasia?  At least I think it's Fantasia that has the dancing, ballerina hippos in pink skirts...  Well, you get my point. 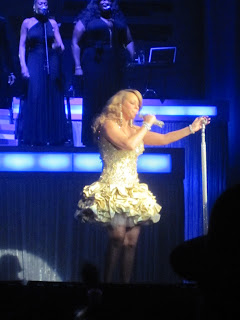 A couple more songs...  Now she's complaining that her hair is wet and that she's going to need her hair and make up people to come out before she ends up having a completely different look on stage.  The team comes out to fix her.  Yep, she's a diva, and she's not ashamed to admit it.  I like that she at least owns who she is. 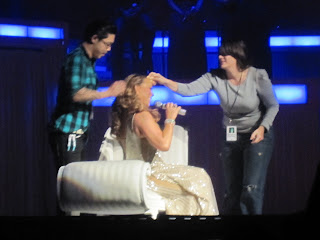 A couple more songs and she sings a song that she dedicates to her hubby, who is in the building.  That's sweet.

Another song comes on and there's some "Cirque du Soleil" type acrobats performing.  The visuals are good. 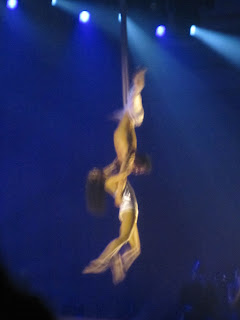 One song, her background dancers having to lift her, set her down, pass her off, so the next 2 guys raise her.  THIS IS HILARIOUS.  I desperately try to take a pic to capture the look of fatigue on the gentlemen's faces, but I'm too slow.  I swear to you though that I saw one of the guys exhale like he had just power-lifted 800 pounds, once the number was over!!!  I can imagine him in rehearsals muttering to himself, "She wants us to do what?!!?".  I start laughing again.

Incidentally, about cameras and picture taking.  In this world of camera phones and digi cameras, you can't expect a bunch of ushers and security people to enforce a "no picture" rule, especially when it's not on the ticket and there are no signs to that efffect.  I'm sorry if you don't want your pic taken and you don't want to be on youtube. MAYBE you should've been camera ready, since you KNEW you were going to perform.  Suck it up like the rest of the artists, performers, and athletes that people PAY to see.

If I remember correctly her last 2 songs were "We Belong Together" which she said was described somewhere as song of the decade.  I'm not going to verify her "facts", but it is a great song.  Her final song is "Hero"...  Man, that song's annoying.  I'm sooooooooooooo over it.  If I never hear that song or the song from Titanic vy Celine Dion ever again, I won't shed a tear. 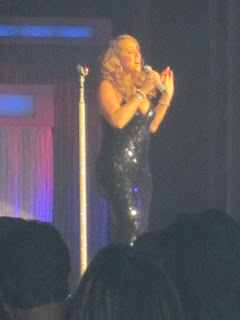 Strong work MC.  Good show.  Hope you treated yourself to some dessert after the show.  You seemed happy and you sounded great, so who cares!

Like the title of this blog, Mariah Carey ~ Love makes you fat, but pounds don't affect your voice...