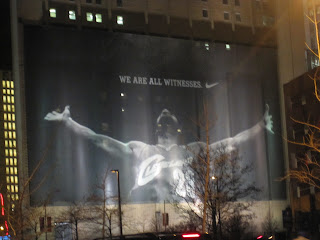 Thank you Continental Airlines for having a hub in CLE and letting me earn just enough One Pass miles to get there on such short notice.  Incidentally, I'm all out of One Pass miles...  My balance is ZERO, and coincidentally ZERO equals the amount of gas left in my tank after this latest adventure.

Crosby v Ovechkin is interesting, but Kobe v LeBron was the premier event for Thursday night.  On Wednesday I was being hammered by messages from folks that had forgotten I used to live, work, and school in CLE and who had decided to give me advice as to where to eat and go...  Ummmm, thanks ~ BUT I know Cleveland, AND and I'm a creature of habit so in essence, all the suggestions were distracting me when I was hunting down a ticket to the game.  Eventually, I find a ticket ~ I'm not courtside, but I am in the lower bowl and over in the corner looking at the visitors bench.  Not too shabby considering it's all last minute...  Now...  Where do I stay?  I text a few friends and realize that they're all spread out around Northeast Ohio.  This is not especially helpful because I don't want to rent a car, and I want to stay downtown.  Frustrated, I decide to bite the bullet and hit Priceline.  I put on my negotiation hat and lowball the hotels in downtown Cleveland.  I really don't care where I stay, because I don't intend to spend much time in my room.  Bingo!  My offer has been accepted and I'm all set for the trip.

7:30PM on Wednesday night, my computer crashes.  Awesome.  Time to call Continental and reschedule my flight.  My sick computer is frozen and is now sporting 3 mini "inappropriate" icons.  That's great.  How the heck did that happen?!?!  I change my flight and now I'm scheduled to depart for Cleveland later in the afternoon.  This works out fine, since I have my blackberry and the tech guy needs my computer for most of the day to re-image it and migrate my data.

Thursday morning I wake up at the crack of 8 and head to the office.  The tech guy says he's gonna need time.  Well, guy ~ it's your lucky day.  I tell him he has all day, but on the off chance that he fixes my computer quickly, I linger in the office until lunch time in hopes that I can have my machine back.  No dice.  My computer is still sick.

I head to the airport and wait at the gate. I get a text from my friend asking me if I'm still going to Cleveland.  Yep, I'm boarding.  I land in Cleveland and for the first time in a long time, I don't have anyone picking me up.  I kinda like that.  It means, I'm free to do whatever I want, whenever I want.  My personal freedom is very important to me.  I love to be around people, but I also cherish my time alone.

I jump on the Rapid.  Yes, I took the Rapid.  I did.  It cost me $2.25 (i.e. versus $30 something for a cab).  I took the Rapid to Tower City and then decided to walk to my hotel on Lakeside.  Yes, I walked.  I did.  I missed Cleveland and it wasn't that cold, and for those of you in Cleveland or who are familiar it's not really THAT far.  I enjoyed my walking tour.  I looked for my favorite homeless guy, Ralph ~ but didn't find him.  I went by the Galleria, the Federal building, and headed towards the Free stamp to take a pic and then kept heading North towards the lake.  For the geographically challenged ~ the "lake" is Erie.  I take a pic of the Browns stadium and then walk further towards the Rock and Roll HOF.  I snap another pic.  OK - I'm done.  Time to head to the hotel and clean up.

I watch ESPN while getting ready and listen to the hype about Kobe and LeBron.  I realize how lucky I am that I am going to go to the game.  It's about 6PM and I need to get moving and find my friend Raj.  Raj and I know each other either from medical school or undergrad.  I'm not sure what we decided, but we recently connected again because of facebook.  I meet Raj and his friend, Mark, at Chocolate Bar ~ the place is about 3 weeks old.  I had a chocolate mint martini and filet mignon for dinner.  I recommend that restaurant to anyone with a sweet tooth.

We leave Chocolate Bar close to 7:45, and I separate from the guys once we hit the arena.  It's so close to tip-off that I start to get anxious.  I can hear the national anthem being sung as I wait to get my ticket scanned.  Ugh.  That means the line I'm in had better start moving.  I hear the Lakers' starting line-up getting introduced.  Double Ugh.  MOVE PEOPLE!  How long does it take to get in?!?!  Alright - I'm in and walking swiftly to my seat.  I make it to section 111, row 13 but I miss a little bit of the Cavs opening line up.  That's fine.  I've seen it.

I'm sitting next to some freakishly tall teenage girl, who has her lanky arm in front of my face as she reaches for a free t-shirt.  Cleveland, we may have a problem ~ but I try to be cool.

I snap a pic of the intros and the opening tip, and it's GAME ON. 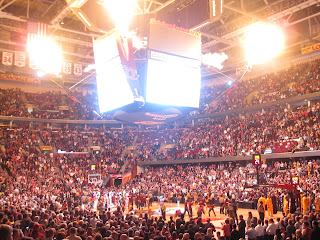 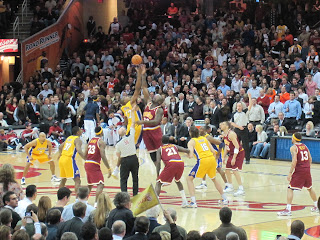 The Lakers take the early lead and already I can hear my friends who are Lakers fans chiming in my ears.  First of all, let me put it out there.  I am an OLD school Lakers fan. OLD school.  Not a Kobe Lakers fan, but a Magic/Kareem/Scott/Worthy fan.  Yeah ~ I left off Thompson ~ you would too...

I don't really have a favorite team.  I went from the OLD school Lakers to Ewing's Knicks and then migrated my way to being a CAVS fan, since 1998 (i.e. not because of Ilgauskas, but obviously that helped).  I'm from Ohio, and I have to admit ~ Cavs basketball is exciting and has done a 180-degree turn, since the days I'd sit in section 128 for 41 games a year.

TNT covers the game and Craig Sager is at the Q.

Lil Wayne is there also, and he's sporting some smart frames and sitting courtside. 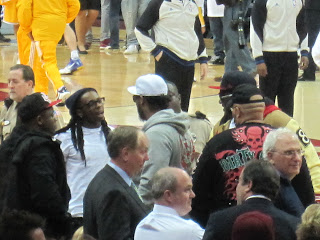 Lil Wayne
This is Ohio, and people from Ohio are proud.  I'm proud of my state.  During the Cavs game they played, "Hang on Sloopy" and the crowd made the O-H-I-O.  Fun.
Lakers took the early lead, but the Cavs came back.  It was a fight until the end, but the Cavs came out victorious.  It was comical watching the Liger guard the Shaqtus...  You know what that is, right?!?!  No.  Ok - here.  According to Wikipedia, "The liger is a hybrid cross between a male lion (Panthera leo) and a tigress (Panthera tigris)."  So, yeah, I called Gasol a Liger ~ or maybe I should say Beowulf....  I swear Gasol looks like a werewolf...  Yeah, I said it...  But, you all know that I'm right.

Ron Artest needs lotion for his legs.  You can see that they're ashy from 13 rows up...

The Q is the equivalent of a racecar driver's outfit...  Is it just me or is there advertising on every bit of bare wall space and electronic signage EVERYWHERE?  On the wall next to me, I saw Hoover vacuums...  Go Canton!  I don't get it...

Thank you, Liger, for not making your free throws. 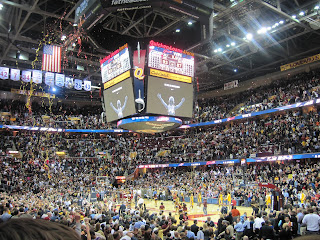 We are all Cavfanatics
Off to West 6th Street to celebrate the victory.  First stop, Mercury Bar.  It's dead.  Next stop, Liquid.  It's the same. With Raj and Mark
Next stop, Bar Fly because Raj's friend knows the owner.  We walk in and Mark starts talking to the owner.  HOLY CRAP ~ I know the owner too...  It's Gary Bauer ~ he used to own the Basement on the East Bank of the Flats.  The Basement is gone, but I'm sure I still have my VIP card somewhere...  I give Gary a big hug and down memory lane we sprint.  It'd been about 8 years, since he used to see me out and about so we had plenty of stories to catch up on QUICKLY.  Random.

Leaving Bar Fly we go to Barley House.  Barley House is having an event and Kim Kardashian is hosting.  Makes sense, since Lamar Odom is her brother-in-law.  There was a line outside, complete with tent and people were clammering to get into the venue.  FYI for those familiar with Cleveland ~ Barley House is the old Spy Bar...  The price of admission is $25.  Eh...  If I my friend wasn't in there, and he wasn't texting me to join ~ I would've passed, but we all anted up and we walk in.  I see my friend immediately and he has to head to VIP really quickly, but says he'll be back.  Normally I'd go with ~ but this is Cleveland, and I play by different rules there.  I hang with Raj and Mark at the bar and guess who I see...  LOL ~ I see Craig Sager.

Immediately, I go over and introduce myself and tell him about when I went to 3 NBA playoff games in 3 nights in 2 different cities.  I told him that not even he does that.  I'm a fool, but he smiles and shakes my hand.  I figure I had my time so I decide to leave him be.  I see cameras flashing out of the corner of my eye.  Um, he's taking pictures with some folks.  Ok - time for me to circle back with him and get my picture taken also...  Yep, that's right ~ Ricky, check the picture.  I WIN!!! 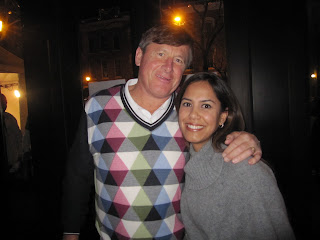 At Barley House, I run into Cleveland Plain Dealer columnist Branson Wright.  I introduce myself, since he started with the paper after I left town.  I'm not sure why, but I did it and it's done, so there's no taking it back. I doubt he'll remember.  It was late.

Eventually we leave Barley House and head to Panini's.  Time to eat.  Afterwards, Raj and Mark are gracious enough to drop me off at the hotel, and lucky me ~ I have a few hours of sleep before I have to head to the airport...  My flight was around 7:30 this morning.  I took a cab to the airport ~ since I couldn't handle the idea of the Rapid this morning.

I was back in the office by 9:30 this morning to retrieve my healthy computer and have been trying to re-install old programs, learn Microsoft 2007 v 2003, and migrate data that I need, between conference calls ever since. 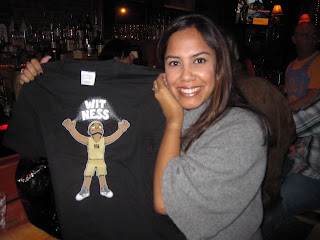