Ortiz and Mayweather agree to fight ~ I visit the Rocky statue 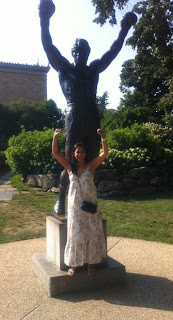 A couple of days ago, Floyd Mayweather and Victor Ortiz decided to fight each other on  September 17, 2011.  Ok.  So let's state the obvious.  This is not the boxing match that people want to see.  Mayweather v Pacquiao would be a dream come true.  However, with Mayweather's legal troubles and the inability to agree on terms for drug testing ~ it seems unlikely that the dream match-up will ever occur.

I was at the Pacquiao v Mosley fight in Las Vegas.  I'm a Manny Pacquiao fan, but I was bored during that latest match-up.

I watched the Andre Berto v Victor Ortiz fight and was impressed with what I saw.  My friend, John, who knows about boxing anticipated that Berto would win that match.  Obviously he was wrong and surprised with the outcome of the fight.  I remember Berto used the ropes numerous times to stay up against Ortiz.  It was a great fight!

I don't know that much about boxing, but I'm curious about the Ortiz v Mayweather match-up...  I hope it's a good one.

On another note, I'm in Philly.  Yesterday, I stopped by the Philadelphia Museum of Art.  Here's a picture of the Rocky statue and I.