So, the folks at Central Graphics Group in Ohio have been busy... 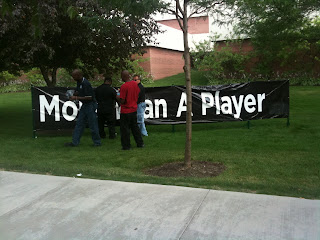 Actually that may be a huge understatement, considering there are a handful of other NBA teams (i.e. New York Knicks, Miami Heat, Chicago Bulls, Cleveland Cavaliers, etc.) playing the free agent lottery.  Rather than focus on earning potential and celebrity it appears that Cleveland has focused on one concept ~ HOME.  The concept of HOME:  More Than A Player, is a message that EVERYONE can relate to. 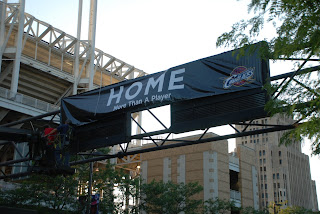 Yes, Cleveland is a smaller market than New York.  However, Cleveland/Akron is home to LeBron and for a man that grew up in the area and has given so much back ~ I'd imagine that HOME is where the heart is.  LeBron isn't like the average person.  Just because some folks out there aspire to live in New York and/or visit New York ~ doesn't mean that he wants to LIVE there and raise his kids there.  I'm not bashing NYC by any means.  I <3 NYC.  I have family that lived/live there and I love to visit it ~ but I also like to return HOME.  In this day and age, it's more than easy to go to NYC for the day to catch a game or see a show and return (i.e. after a day trip or couple of days) to Ohio.

The weather in Miami is gorgeous.  Yes, I love the beach and the temperatures, but that doesn't mean people want to necessarily live there either.  I've spent many a weekend/week in Miami and enjoyed myself ~ but I still wanted to head HOME after a few days.

Sure, some basketball players don't necessarily adopt the city they play for as their home in the off-season.  They may rent an apartment/house or trade homes with another player who's also been relocated ~ but still, why shuffle a HOME when you don't have to?

I used to be engaged to one of  LeBron's teammates.  We were together for 4 years.  I know what it's like to see the guys travel to 41 away games a year.  Basketball is different than other sports in a way that basketball players draw more attention to themselves just because of their height.  They need a place to retreat after practice and in between games.  When you have the comforts of home and everyone that you care about right next to your work, why on Earth would you rock the boat, leave $30 million on the table, and move to a new team?  LeBron is special in that he has the chance to play at HOME, and I think he knows it.

Yesterday 12 more signs went up around Akron, Ohio so that LeBron could see them on his drive HOME from his basketball camps at the University of Akron.  FYI - basketball camp ends tonight. 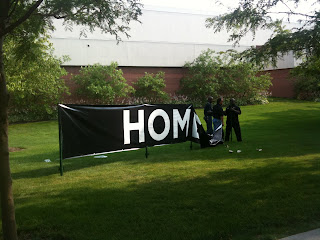 Photos are courtesy of Dave Soulsby, President of Central Graphics Group.  Coincidentally, I just figured out that Dave is also an Akron alumnus.  Go Zips!

It took Dorothy a tornado, a walk down the yellow brick road, and fights with flying monkeys, before she realized that, "There's no place like home."  So what if it took LeBron a few weeks to come to the same conclusion.