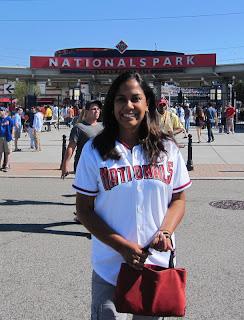 Usually I'm in charge of the tickets and my desire to see the ENTIRE game is why I'm the one racing past you in the parking lot znd on the concourse to get to my seat ~ before the opening tip and the first pitch.  I talk to a lot of sports fans when I travel and I find it funny, that I never heard the comment before that new stadiums like Target Field are good, but a major deficiency is that that concourse isn't wide enough.  That's a legitimate and serious concern for fans like me, that want to be able to maneuver easily.  So, for those of you designing new stadiums, arenas, and ballparks - keep it in mind, that when you offer concessions and souvenirs you choke the flow of traffic on the concourse before/during/after the game.  Enough about that...

Wallking towards the park, I noticed 2 guys selling Witness 37 shirts for Strasbug.  I need to get myself one of those shirts.  ****  Mental note: find out how much those shirts are and grab one next time. 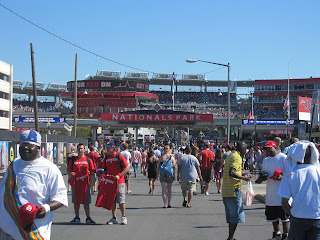 Sporting my new Nationals jersey, I went and saw Strasburg pitch and watched the Washington Nationals rally, from a 5-3 deficit, to defeat the New York Mets in the bottom of the 9th inning.  It was an awesome comeback for the Nats (i.e. worthy of fireworks, even though it was only the 3rd of July).  Honestly, the promise of Stephen Strasburg's pitching was enough to get my brother and I's childhood friend, Scott, out to his first game at Nationals Park. 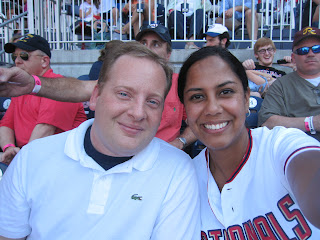 ****  Seriously, has anyone used the phrase "K-game" to describe a pitcher's best performance as opposed to A-game?!?!  If not, I'm claiming that terminology for TheWirk.com right now...  K-game is defined as a pitcher's A-game, but since we want strikes it's a K-game.  Add it to the Wirktionary. :-P

In between innings Scott tells me that he knows the cousin of another Nats pitcher.  Oh really...  It looks like Scott has been holding out on me.  Scott is now responsible for finding tickets to another game, and I'm pretty sure he doesn't even know it.  I hadn't seen him in months, and he's been living in the area for almost a year so with the lure of baseball, I was able to get him to come out of "hiding".

Adam Dunn hit was looked like a GAME WINNING GRAND SLAM ~ but the ball hit the wall and bounced back on the field.  The play was reviewed, after Carlos Guzman and Willie Harris both scored for the Nats. 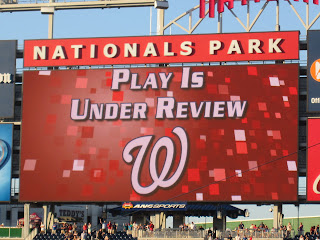 After intentionally walking Josh Willingham, Pudge Rodriguez had his chance to be the hero of the game (i.e. and he took it) when he singled, and Ryan Zimmerman scored! 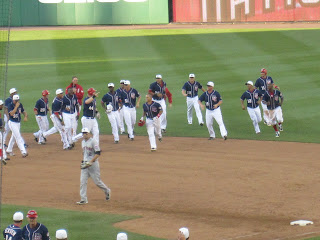 You can see the smile on Ivan "Pudge" Rodriguez's face 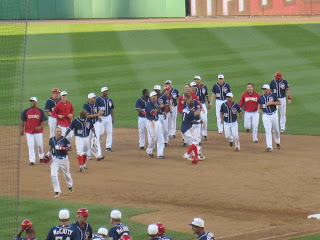 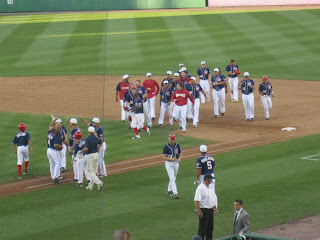 K-Rod aka New York Mets' pitcher Francisco Rodriguez , didn't bring his K-game either...
Ever get the feeling that something amazing is going to happen?  Well, I did.  I shot video of the winning play and Ivan "Pudge" Rodriguez crossing home plate, but the video killed the rest of my memory card, so I deleted it.   Futther, let's be honest ~ I thought I could scoop a clip of the winning play off of youtube easily.  Turns out I'm wrong, and I just checked my camera and I did delete the video.  Ugh.

Oh well.  Hope you enjoyed the pics from the game.

Remember what Yogi Berra said, "It's not over, til it's over."