I never turn my phone off.  Ok - that's a lie.  I turn my phone on airplane mode on planes.  Regardless, that's not the point.  The point is I'm rarely if ever away from my phone because you never know who's going to call and what can happen.

I was running around on Saturday and on my way to grab my friend, Amy, so we could go and see Mary Poppins at the Kennedy Center.  I wanted to go to the matinee show so I'd have my night open to do whatever else I wanted to do.  ****  For those of you that are curious about the show ~ go see it.  It's not completely true to the movie, but it's a great adaptation.  My only real complaint is that the show didn't do the whole "Step in Time" song. 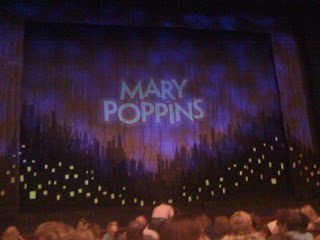 View from our seats in the Opera House at the Kennedy Center
Now back to my baseball story... 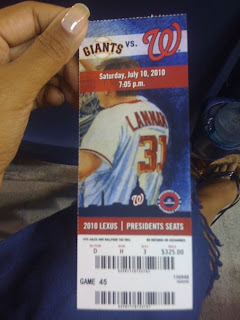 While I was driving, I received a text from my friend, Pat.  He said he might end up with some really great tickets to Saturday night's game and wanted to know if I wanted to go.  ****  Lucky for me, his buddy was at the beach and couldn't go!  I texted back "Yes!!!!!!"  Next thing you knew I had a ticket to the game in the President's Club.  What a guy!!!
Awesome night for a baseball game, and I got to see the San Francisco Giants defeat the Washington Nationals.  The Nats had the lead, but blew it.  Regardless, it was a GORGEOUS night out for a baseball game and it was definitely fun to check out the President's Club.
For those of you that don't know ~ the President's Club is the area right behind home plate and the seats are padded.  The seats come with all you can eat food and a buffet before/during the game.  From inside you can see the Nats' batting cages and the Media Room where the post-game press conferences are conducted. 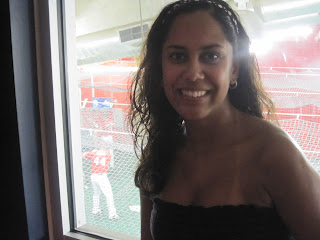 Batting cages behind me ~ Adam Dunn at bat 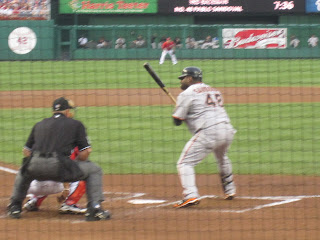 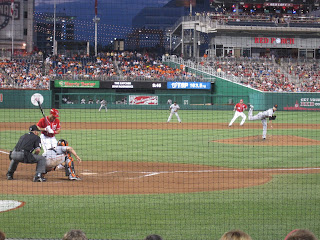 Pudge Rodriguez at bat with Adam Dunn ready to run 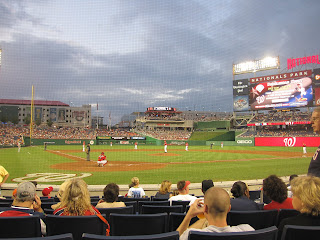 Awesome seats and a gorgeous night for baseball 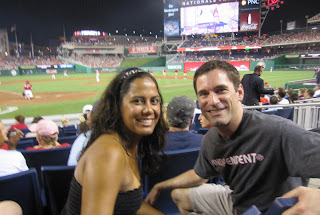 Pat and I in our seats 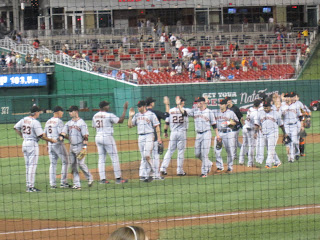 San Francisco Giants won
THE WIRK
Posted by THE WIRK at 9:17 PM