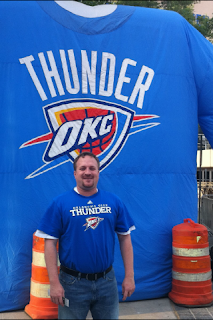 I'm trying to update my blog since I've been traveling, but I just want to know one thing.
Why does Russell Westbrook think he's the star of the Oklahoma City Thunder?
Kevin Durant needs to grab Westbrook and DEMAND the final shot.  This is getting ridiculous.  NOW, Thunder fans need to grind out overtime with the team against the Memphis Grizzlies.  Terrible.
I like Westbrook, but this is getting crazy.
I'm convinced that this series just might kill my friend, Ricky...  ****  This is a picture he sent me from one of the playoff games in Oklahoma City.

Update:  I just received a text from Ricky, who is in Memphis and it read, "Win or lose, best game ever attended".