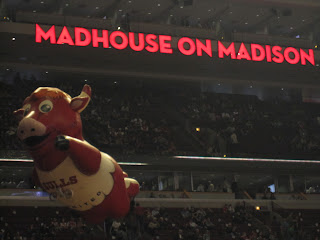 On Sunday night, I went to the movies rather than watch Game 1 of the Miami Heat v Chicago Bulls series.  Part of it was poor planning on my part.  However, when I realized my "mistake" I decided I'd follow through on movie night as opposed to watch the game since I thought the game wouldn't be a good one and I wanted to catch up with my friend, Megan (aka Pita).

As soon as the movie, ended I ran home to check the score and watch the end of the game.  I landed in front of the TV with 8 minutes left in the game, and I couldn't believe my eyes when I saw the score of the game.  The Bulls were up ~ BIG.  It was a beautiful sight!

I sat perched in front of my TV in disbelief as the Bulls fought for rebounds and played extraordinary defense.  I also watched Taj Gibson deliver two major exclamation points when he put "up" (i.e. or is it "down") two massive dunks.

Sure it was only Game 1, but it still counts.  The Bulls made quite a statement.  Tonight is Game 2, and of course Coach Erik Spoelstra will make adjustments.  I'm sure the Heat won't lie down tonight.  I've said it before, and I'll write it again.  I like Pat Riley, Erik Spoelstra, and Dwyane Wade.  I just can't root for LeBron or Chris Bosh.

It should be a good one in Chicago...  Make no mistake.  I will not be at the movies...  I can't wait to see what Derrick Rose and his squad do tonight.

Oh, and for those of you that don't watch PTI, check out Michael Wilbon and this clip.  It's awesome!