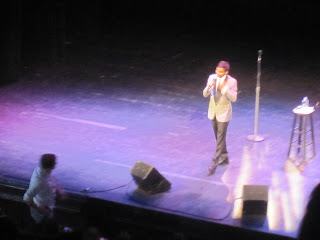 I love stand-up comedy.  I grew up watching comedians perform stand-up on TV, since my dad was strict, and I was never let out of the house.  OK, that may be an exaggeration...  Never say "never", right?  Right.  However, ask anyone who knew me when I was younger and they'll tell you that my parents ran a tight ship!
On Friday, September 17th I went with some friends to the Warner Theatre to see Aziz Ansari.  I'm not sure which of my friends clued me into the fact that he was coming to town, but the minute I heard I scooped up 4 tickets.  I went to the show with my friends Bik, Heather, and Amy.  After dinner at Chef Geoff (i.e. my "go to" spot whenever I have something to attend at the Warner) we were ready for the show.
****  You should know that the service/kitchen is slow at Chef Geoff, when there are events at the Warner so you should budget your time properly.  Lucky for us, we were seated by the window, so it was easy to see when the line into the theatre was moving and when it was worth our time to start queueing.


While sitting by the window, I saw someone I know run past it.  I knew he'd attended the earlier show so I sent him a text asking about whether or not there was an opener.  John Mulaney was the opening act, and I thought he was funny.  If I remember correctly, he has ties to the DC area.
I was excited to see Aziz and he didn't disappoint.  Although I must say I liked his previous tour material better.  Don't get me wrong.  I still think it was a great show - but his previous material is tighter and funnier.  That's just my 2 cents, but go check him out for yourself and be your own judge!  Don't worry ~ I'm not going to tell you his jokes - you need to see him or look them up on youtube. 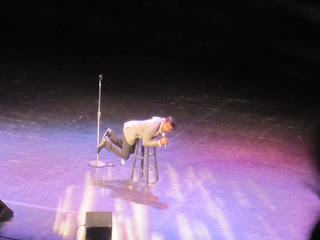 At the entrance for the Warner there were a bunch of signs that  no photography would be allowed.  Aziz made mention of this and gave the audience a couple of minutes to snap away so that people could get it out of their systems and he could do the show without the flashing.  I thought that was a nice gesture.
Check out Aziz Ansari when he comes to a city near you to perform his "Dangerously Delicious Tour" or buy Parks & Recreation: Season One and laugh at him at home.