Jets lose their MNF home opener to the Ravens ~ Football with my cousin, Nick 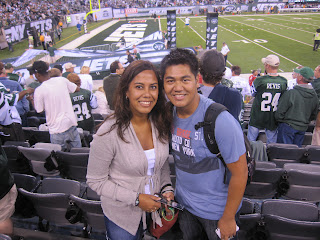 I had had tickets to the New York Jets home opener for a while, and just wasn't sure who I wanted to take to the Monday Night Football game.  Problem solved when I pinged my cousin, Chris, and told him that I wanted to take one of my cousins with me.  Sure enough (i.e. in less than 24 hours) my cousin, Nick, sent me a text.  I love my cousin, Nick.  He's my buddy.  When he was in college, I once flew him from Jersey to Houston to come with me to see the Rockets in the Playoffs.  I'd do anything for family and Nick's great so I knew we'd have a fun time. 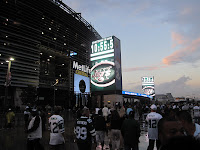 I took the train to Secaucus and then to the New Meadowlands Stadium.  It was easy, but you need to be aggressive when getting on the train or you'll be left in the dust.  The train drops you right off, next to the stadium.  Incidentally, on the train I met a man who was taking his son to the game.  The son was home from boarding school and wearing a Jets jersey, but his father is part of the ownership group that bought into the Pittsburgh Steelers franchise.  He showed me his Super Bowl ring.  I asked the kid if he was a Steelers fan and he just shrugged his shoulders.  Yeah, I guess "money" can't change "heart". 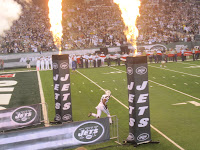 I was looking forward to the hype surrounding the Jets.  I wanted to see what Darrelle Revis could do.  I wanted to see LaDainian Tomlinson prove to the Chargers that they were wrong to let him go.  I couldn't wait to see Jason Taylor on the field in football pants.  I was curious to see if Mark Sanchez could win.  Granted I'm writing this piece late in an effort to catch up, but all I can say about the whole thing based on what I remember is that Jason Taylor is still fantastic to look at, "No" the Jets cannot win with Mark Sanchez as a quarterback.

I watched an episode and a half of Hard Knocks.  To be honest, that's a generous estimate since I may have seen the same episode twice. Regardless, I saw a scene in the show where Sanchez was at a table and more or less berating himself.  I don't think he can win and it appears that he doesn't believe he can either.  Awesome.  That must just be Fan-tas-tic for Jets fans.  During the game, the guys behind me were yelling for Mark Brunell...  Yep, it was like that. 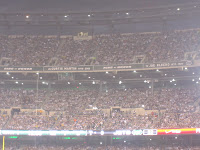 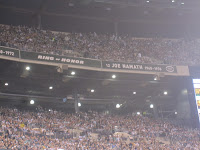 On another note, I was curious to see how the stadium staff would transform the venue from Giants to Jets in a day.  Seems like plenty of work - but they got it done. 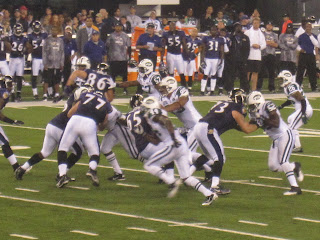 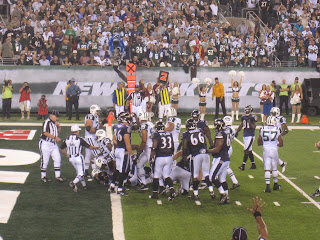 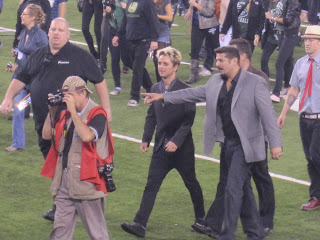 Did I mention that Green Day performed at half-time? 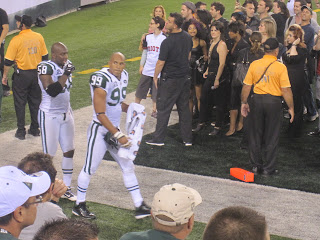 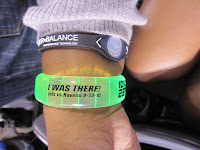 Incidentally before the game, Nick gave me a black Power Balance bracelet.  He said that Mark Sanchez wears one too...  Ugh, I wonder if I'm going to start delivering lack-luster performances and disappointing people now, also.  Man...  I hope not.
Great night, but a Jets victory would have made it better. 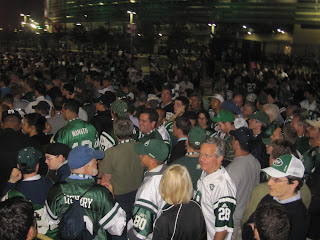 Jets fans waiting for the train to leave the stadium 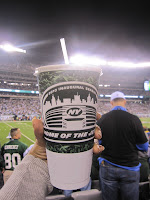 Get your Power Balance bracelet here, and see if it improves your performance.
THE WIRK
Posted by THE WIRK at 7:19 PM