Happy Birthday to Me ~ AC with my gambling buddies 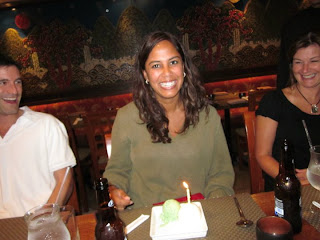 I'm lucky to have a good group of guy friends who like to gamble (i.e. Kevin, Carlos, Mario, and Pat) and who wanted to take me to AC for my birthday.  I really don't know if they actually thought of it as my birthday present, but as far as I'm concerned it was my birthday trip.
We got a late start on the drive up, but all had  arrived at Caesars close to 9.  They treated me to dinner at the Noodle Bar and then it was time to win!
Incidentally, it was also the week of the premiere for Boardwalk Empire and a few of the cast members were playing craps.  Almost everyone and their mother had lanyards for the screening.  Random.  However, Caesars was definitely home base for that crew.

The craps tables weren't as hot as they normally are, but I still managed to do pretty well.  Posing pics of my chips is getting old, but here's the ticket I won, when I hit a flush (i.e. not sure if it was straight or not) when playing video poker.  For that win, I'd like to credit my friend, Pat, since he had slot credits to burn.  I was just killing time and WON. 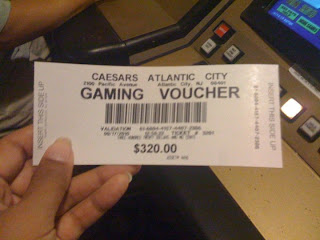 The guys like to call me "Pamphlet".  As in, get some help, know when to quit, blah blah blah.  If anything I win more than they do...  Just saying :-P
At the end of my trip my friend, Mario, presented me my birthday pamphlet (i.e. not a birthday card).  The guys signed my pamphlet like they'd sign a birthday card!  HAHA.  I love it!!!!! 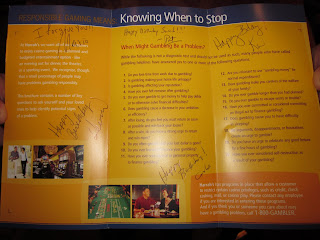