NBA Media Day was yesterday and Training Camp has begun

Yesterday was the "start" of the NBA Season with NBA training camp opening up and Media Day!  For those of you that don't know, media is a busy day for those involved in the NBA.  It's like the first day of school for your favorite NBA athletes.  They get their hair cut, some wax their backs (i.e. I swear), and make sure they're camera ready when they have their pictures taken, talk to the press,  and answer questions about the offseason and what they expect for the upcoming season(s).

I was busy yesterday, so I didn't catch (i.e. see/hear) any of the action, but I'm sure that seeing Carmelo Anthony in his jersey served as some (i.e. perhaps temporary) consolation to Denver Nuggets fans.  Further, I can't imagine how different media day was for Cleveland Cavaliers reporters compared to the previous 7, now that LeBron has, "taken his talents to South Beach".

Keeps your eyes open, because cities that aren't used to an NBA presence during the year often host the teams during training camp.  I know that some franchises have left their "homes" in order to focus on the upcoming season (i.e. the Phoenix Suns are in San Diego, the Minnesota Timber Wolves are in Mankato, the Miami Heat are at Hurlburt Field and Eglin Air Force Base in Fort Walton Beach, Florida, etc.).  Years, ago I was in Hawaii and saw several men in purple and gold.  Sure enough, I was in the pool that afternoon and noticed Brian Shaw sitting in a chair.  Yes, boys and girls.  The Los Angeles Lakers held their training camp in Honolulu that year and could be found around the Hilton Hawaiian Village. 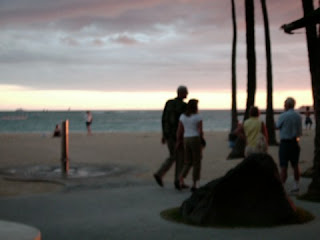 Phil Jackson and Jeanie Buss walking the beach in Hawaii
Forget preseason, I'm looking forward to the first NBA game of the season!  For those of you still relishing in last year's NBA Championship, here's a DVD so you can re-live those moments :-P