Here are some random thoughts, status updates, and quotes from the weekend.
As soon as I landed, within an hour or so, I received a text from my best friend from college/medical school.  He was in Vegas also.  Talk about lucky!  What a great coincidence... 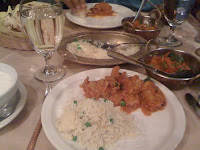 Eventually, my dad got hungry so it was off to Gaylord India Restaurant at the Rio Hotel and Casino.  It's one of our favorites.  As soon as we ordered, there was an Asian waitress that came over.
We ordered the chicken curry.  When it came out, there was also some vegetarian curry.
Friday night I bet the Atlanta Hawks to cover against the New Orleans Hornets.  Friday night, was also the night that history was made and the Hawks only scored 59 points (i.e. the lowest point total in FRANCHISE history)...  ARE YOU KIDDING ME?!!?  Absolutely ridiculous.
Friday night I was playing rapid craps over at Bill's.  It was painfully slow, but it was great to sit and laugh and catch up with my best friend.  We sat there betting the "Don't" since it was impossible for any shooter to get into any kind of rhythm with a slow dealer.  As we were sitting, he said "Isn't that your dad?"   Sure enough, my dad was walking into the casino.  I was happy to have them both there and I re-introduced them.  Within a few minutes my dad left to go get some food.
Later that night, I checked out The Cosmopolitan (i.e. I believe it's a Marriott property).  It's fancy.  I don't think it's for a serious gambler.  It's more of a see and be seen place.  I didn't check out the table minimums this trip.  I'll do it next time.
I also walked over to Vdara Hotel and Spa.  The rooms are nice.  I saw an executive suite.  It had a kitchen, washer and dryer, etc. but no casino.  It was nice, but for my money and the location, I'd rather stay at the Palazzo or Venetian. 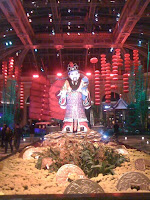 I passed through the Bellagio on the way back to the strip.  There was no robbery taking place so it was cool.  Based on the decor there and near the Palazzo, I think it's the year of the rabbit.  I'm a rabbit and rabbits are lucky so I couldn't resist taking pictures. 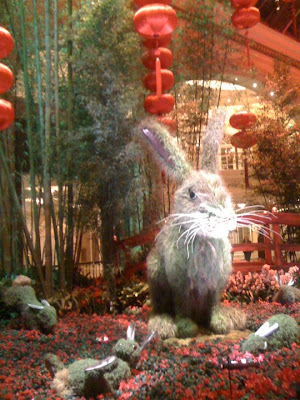 Saturday I dragged myself down to the sportsbook to bet on Ohio State.  The Buckeyes are ranked #1 and were in Illinois.  I had Buckeyes -3.5, the money line, and in a parlay with the Washington Capitals.  All the bets were winners!
Saturday night I was at the Venetian's sportsbook, watching the Golden State Warriors v Los Angeles Clipppers.
I watched the rest of the game after dinner at Harrah's while my dad was at the craps table.  The Indiana Pacers' Posey launched a 3-pointer towards the end of the game.  The way I see it, the Blazers owe me a point, since I lost by half of one.  Those are the breaks...
When I went to check on my dad he was sitting on a stool playing craps with thousand of dollars in front of him.  No wonder he wasn't bothering me.  I tapped him and told him it was time to go.  After another 10-15 mins he left the table a WINNER.
He has to sit since he's not really in condition to stand at a craps table for an extended period of time (i.e. read HOURS).  He's assured me he's going to start exercising so he can walk the strip more and stand longer.  I find this completely hilarious and have asked him to document his training regimen so I could laugh some more.  He thinks that I'm kidding.  I'm not.
Back in the room dad was tired and was rubbing his legs since they were sore.
The man is funny. 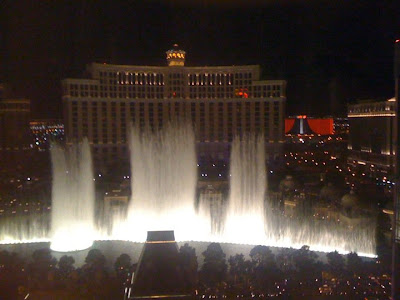 Before I left I gave my dad specific instructions to bet on the Green Bay Packers and the Pittsburgh Steelers for the AFC and NFC Championship Games.  I couldn't place my bets since the book had closed, and I was leaving.  He could and did. 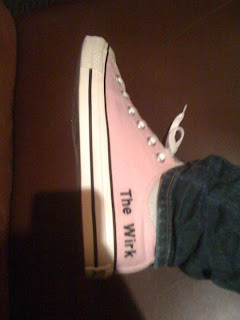 We cleaned up nicely...  Now I just need to figure out how to get the money from him.