The Thunder have me wanting to do something I've never done before...  I'm seriously thinking about going to Oklahoma City.  I've seen the Thunder on the road many times, and they're exciting to watch.  I have yet to see them play at home though. 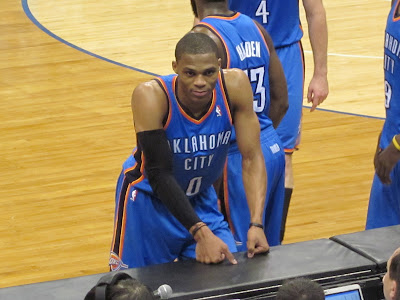 Russell Westbrook had a triple double tonight (i.e. 32 points, 13 assists, and 10 boards).  I know Kevin Durant gets a lot of much deserved attention (i.e. 36 points tonight), but for those of you that aren't paying attention to Westbrook ~ get your head out of the sand and open your eyes!
Westbrook is tough, and the 1-2 punch of Durant and him is lethal.  Don't believe me?  Ask the Orlando Magic who lost tonight.  Final score of the game was 125-124.  The game was HOT.

Dwight Howard had 39 points and 18 rebounds, and Orlando erupted in the 4th quarter.  However, the Thunder held on.