Lakers crush the Cavs, and LeBron tweets about karma 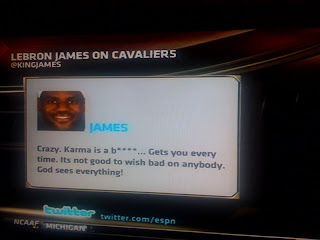 For those of you not on Twitter, I have no idea what it's going to take for you to get with the times if you're a sports fan.

Check the latest Tweet from Lebron James (aka KingJames on Twitter): "Crazy. Karma is a b****.. Gets you every time. Its not good to wish bad on anybody. God sees everything!"

Yeah, the Cleveland Cavaliers just got blown out by the Los Angeles Lakers.  The Cavs were without Anderson Varejao, and the fact that that makes such a difference is sad in itself.  The final score of the game was 112-57.

I think that the Cavs should offer Ted Williams (i.e. the man with the voice) more than an announcing job.  Perhaps they should let the man try out for the team.  It couldn't get much worse...  Could it?!?!

Ugh.  I'm not a fan of contraction for the NBA, but I do think based on some of the box scores I've been seeing that the NBPA and NBA should explore the idea of a mercy rule.  Some of these teams are just horrendous...

I feel bad for Byron Scott.