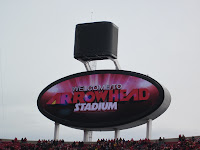 Cross Arrowhead Stadium off the list.  I went to Sunday's AFC Wildcard game and watched the Baltimore Ravens play the Kansas City Chiefs. 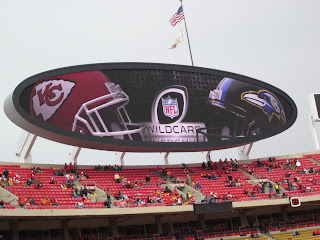 ﻿I have some dear friends who think I've got "issues".  That's fine.  Everything is a means to an end, and my goal is to hit all the stadiums, arenas, and ballparks for professional football, basketball, and baseball.  Friday I was basketball.  Sunday was for football.
I travel because I want to and because I can.  I have plenty of frequent flier miles and time.  I have status on various airlines and don't mind air travel.  Plus, unlike most of the people that complain about my schedule ~ I'm YOUNGER by at least 10 years.  ****  That's right.  I know some of you are lying about your age, but I KNOW I'm younger, and therefore I have more energy. 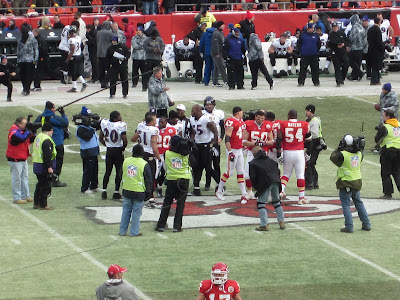 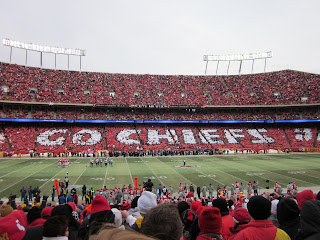 My journey to Kansas City started early.  It was my first trip to Kansas City and my first trip to Arrowhead Stadium.  I'll make it back to Kansas City eventually to see a Royals game, but then I'll probably just cross the city off the list.  There were so many Baltimore Ravens fans on my flight that it might as well have been a charter.  When I arrived in KC it was almost 10AM so I decided to grab a cab and head to the stadium.  I'll tell you right now that a cab to the stadium isn't cheap.  However, I'd rather pay than deal with driving, parking, and refueling a rental car when I do short trips like this. 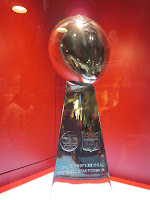 Arriving at the "New Arrowhead" stadium a little before 11 was perfect, because it gave me time to check out the Chiefs Hall of Honor.  ****  I asked the old man sitting next to me why it's called the New Arrowhead Stadium and he said it's not "new", but that it's been re-done.  Well that explains that.
As I took in the sights and sounds around me, I tried not to freeze to death in the 14 degree temperature.  ****  There was snow on the ground.  I spent $8 on two packs of handwarmers.  With one warmer in each boot and coat pocket, I managed to hang in there for the whole game. 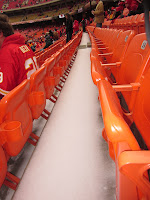 Honestly, I need to make a mental note to plan on the weather before I decide to settle on a game.  Why on Earth did I think Kansas City would be warm?!?!  I must be losing it...  Relatively speaking though, the game was nothing compared to the AFC Championship game in 2004 (i.e. Indianapolis Colts v New England Patriots).  Foxboro in January is brutal.  The old man and his buddy chatted me up during the game and even brought me back a hot chocolate.  Nice guys, but I expected nothing less since I was in the Midwest.
As the game started it appeared that the Kansas City Chiefs were going to make a ballgame of it.  Matt Cassel definitely had his work cut out for him with the Baltimore Revens' defense.  I figured out who Jamaal Charles was as he proved to be a force on offense. 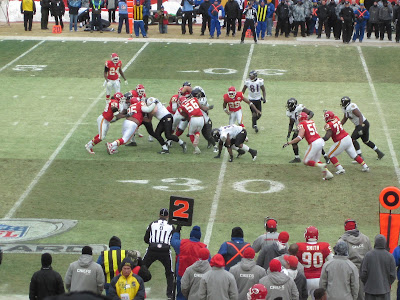 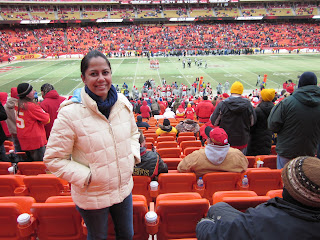 At the end of the day, the Ravens dominated the game and defeated the Chiefs.  I saw Ray Lewis sack Matt Cassel in the 4th quarter, and all I can say is that I'm happy I wasn't the one being thrown onto the ground.  Ouch.  I've never been a huge Joe Flacco fan either, but he has my attention now.  The final score for the AFC Wildcard game was 30-7, and the Ravens advanced to play the Pittsburgh Steelers on Saturday afternoon. 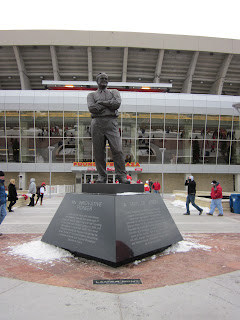 After the game, I went straight to the airport to catch my flight.  Coincidentally I arrived at KCI at the same time the Baltimore Ravens did.  As I walked with them into the airport, I saw some kids in Ravens' jersey cheering them on.  I mustered a "good game, guys" and kept it moving.  It's not like I can recognize a football player without his jersey on, so sticking around and taking pictures would be stupid.
I did notice a Raven following me, so I turned around to him and he asked me if I knew where the Southwest ticket counter was located.  I told him I thought he was in the wrong area and that Southwest was either behind us or in a different terminal.  Nice guy.  I told him I was on my way back to Baltimore, but obviously he was headed somewhere different than his team.  I asked the guy in the gift shop for directions for him and then walked to my gate.
When I got home I checked the Ravens' roster and the mystery Raven, was Ed Dickson, Oregon alumnus.  He was obviously on his way to Phoenix to watch (2) Oregon and (1) Auburn play each other for the BCS National Championship.
Even though Sunday was a football day, there's no escaping basketball.  Check out the exchange I had with my cab driver on the way back to the airport.
Cab driver: I came here to play basketball.
Me: You look like a 4.
Cab driver: What?
Me: You heard me.
Cab driver: You know ball?
Me: I know lots of stuff...