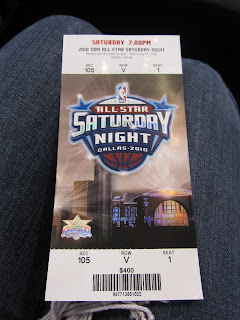 It's almost February.  Ok, technically January just started...  Regardless, I like to plan ahead.

February has 2 things of note.  The Super Bowl and the NBA All-Star game and festivities.

As I start to think about February, I saw a headline that LeBron was contemplating entering the NBA Slam Dunk contest, but had concerns about the wear and tear on his body.


Are you serious?!?!  Now, I never counted how many dunks they perform during the event, and I'm not about to look it up ~ but you have to be kidding me.  Wear and tear?!?!  Dunks?!?!  ****  Yes, I'm sure it takes something out of you to dunk.  No, I've never dunked a basketball.
I'll tell you this.  I'm smart enough to know that the actual NBA All-Star game will take more out of him than the dunk contest.  Further, as a competitor, I believe that if LeBron really thought he could win ~ he'd compete.  Can ESPN.com, please spare us the LeBron is torn on dunk contest article?!!?  In addition in that article, LeBron pointed out the obvious in saying that Blake Griffin would have "home court" advantage (i.e. the All-Star festivities are in Los Angeles this year).
So, am I supposed to believe that if LeBron's dunk was really better that the judges would cave and give it the title the rookie?!?!
Come on, now...  This isn't my first rodeo.  Looks to me like LeBron's scared to lose... 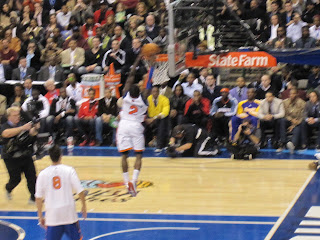 Lastly,  I haven't looked to see if he's dunking this year or not, but Nate Robinson has won the past two years. **** I took this picture of Nate Robinson dunking, when I was in Dallas for NBA All-Star weekend 2010. You try focusing on him when he's in motion with a point and shoot camera...