Nets walk away from table, where Carmelo never sat ~ Trade drama over "for now" 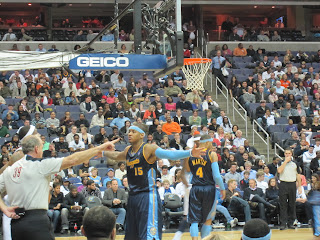 Now that Mikhail Prokhorov has called off the Nets' pursuit of Carmelo Anthony, I think we can all move on for now.  I debated on whether or not I'd compose a post about it all, and for the sake of being comprehensive here goes...
My prediction: Carmelo Anthony plays out the season in Denver as a Nugget AND then goes to the Knicks... I don't believe the Chicago Bulls talk...  That's my 3 cents based.  ****  Why 3 cents?  It's 3 cents because I'm smarter than the average person, and the average person gives you 2 cents.
So what does this mean? 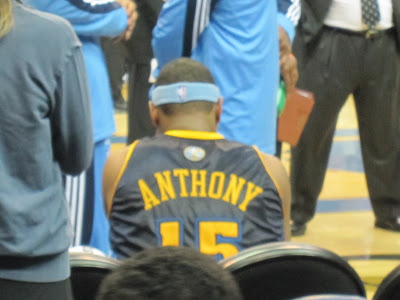 With regard to Richard "Rip" Hamilton sitting on the bench...  I don't really see a reason for him to play.  I doubt the Detroit Pistons will do anything this year.  Further it appears that coach, John Kuester (i.e. a Tarheel), wants to go another direction (i.e. read: younger).  Personally, I don't like watching solid-NBA vets sit, and I'd want to see Rip and his $11 million run up and down the court.  However, my opinion appears to be the minority.  I guess when you're preparing to rebuild, I guess the veteran presence doesn't matter.  ****  Hmmm, now that I think about it, it sounds a lot like the Washington Redskins' McNabb situation...
****  I took the pictures for this post during the Nuggets v Wizards game, February 2010.