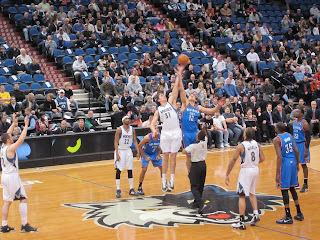 Tonight was a good night to be in Minneapolis.  Coach Scott Brooks brought his Oklahoma City Thunder to the Target Center to take on the Minnesota Timberwolves.  I feel like the Thunder are in town every month.  I know that's not the case, but it feels like I just saw them here.
Regardless tonight's match-up went into overtime and Kevin Durant blew up for a million points and a thousand rebounds.  Ok.  So he didn't really have a million points and a thousand rebounds, but it felt like he did.  Durant ended the game with 47 points and 18 rebounds.  That's not a typo.  He had 47 points and 18 boards.

Jeff Green was the 2nd leading scorer for the Thunder.  He dropped 19 points and contributed 8 rebounds. 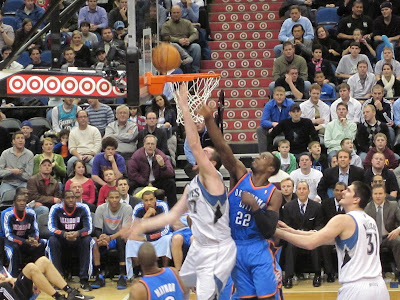 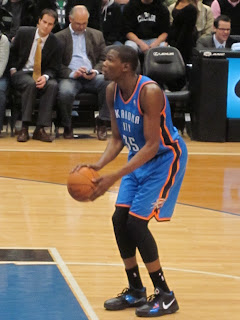 During the 1st half of the game Russell Westbrook had a monster one-handed dunk that I would've taken a picture of to post here, had I not been looking at my in-seat menu.  Seriously?!?!?  When am I ever going to learn not to turn my camera off and to pay attention ~ especially when high-flying athletic players like Westbrook are on the floor. 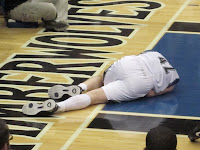 For the Minnesota Timberwolves, the dynamic duo of Michael Beasley and Kevin Love came ready to play.  Beasley had 30 and 9.  Love had 31 and 21.  Love is a tough.  During overtime he hit the floor and everyone at the Target Center held their breath, until he got up off the floor.  He hit the deck right in front of me and I swear I heard it.  Ouch. 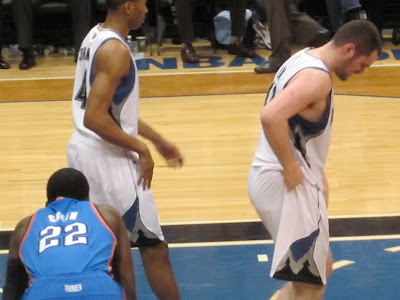 I told the guy next to me that the Timberwolves would lose.  I don't mean to dog the team, but the guys are just too young and/or inexperienced to close close games out.  It's sad, but true.  This game was winnable for the young Timberwolves, but the Thunder rocked the Target Center to win, ultimately with a score of 118-117. 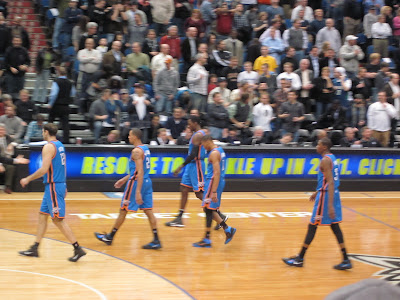 This picture of the Thunder reminded me of Reservoir Dogs
Kevin Durant blew up in a career game (i.e. that went into overtime), during my final night in Minneapolis.  I'd say we both went out with a bang.  Thunder Up! 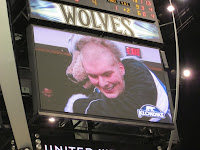 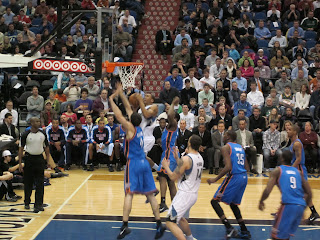 **** Last, but not least, just in case the assistant coach I met in the hotel concierge lounge before the game reads this post, I should point out that I was right.  Wes Johnson plays for the Minnesota Timberwolves.  This is a picture of him in the air going for a lay-up.
THE WIRK
Posted by THE WIRK at 12:09 AM