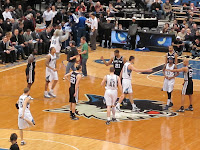 $20 tonight would've gotten you a ticket to see the San Antonio Spurs v Minnesota Timberwolves.  The final score was 107-96.  Kevin Love had another double-double, 20 points and 20 boards.  Michael Beasley played but has been bothered by a bad ankle.  Luke Ridnour and Martel Webster both contributed 18 points in the losing effort.  The Timberwolves shot poorly all night, 38% was the field goal percentage.
No one will beat the Spurs shooting 38%.  It's not rocket science. 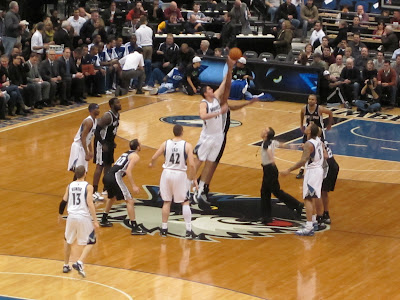 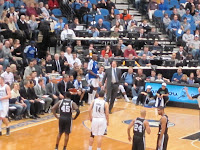 The Spurs were just too tough for Kurt Rambis' squad.  Correction:  Maybe I should say Bill Laimbeer's squad since the technical fouls were flying and Rambis was ejected with about 8:30 minutes to go in the 3rd quarter. 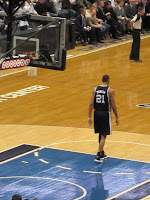 I knew that the Spurs would win tonight, but I thought that perhaps the Timberwolves would raise their level of play to compete.  I also thought tonight's game would be a chance for Gregg Popovich to rest his "starters".  I was wrong.  Tim Duncan, Richard Jefferson, Manu Ginobili, and Tony Parker all contributed substantial minutes and balanced scoring.
As much as I'm not a Tony Parker fan, I can't deny the fact that the man is good.  Here's a picture of him in the air, after driving the lane, and dishing the ball to a teammate for an assist. 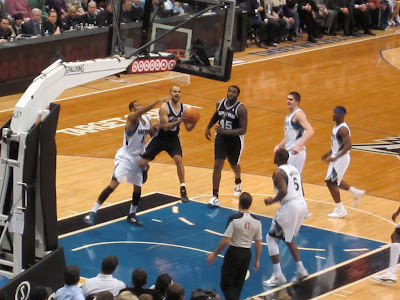 There wasn't much energy in the Target Center tonight.  I think the most fan energy came out during the t-shirt toss.  Regardless, for $20, I was pleased with the level of entertainment and had plenty of Tweet material. 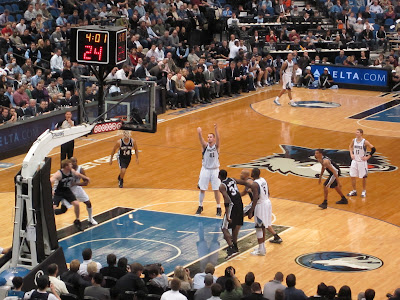 There was a very scary moment for Timberwolves' fans when Beasley drained a 3 with just under 4 minutes left in the 4th quarter.  He landed and immediately grabbed his ankle.  He was able to get up, but hopped as he was helped off the court. 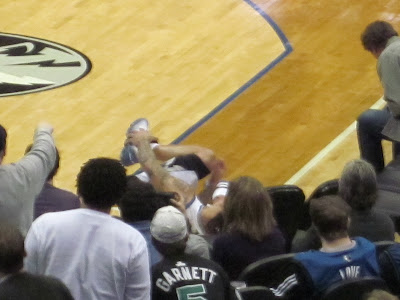 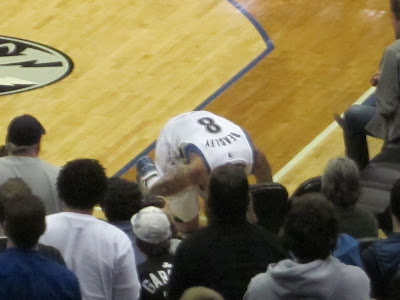 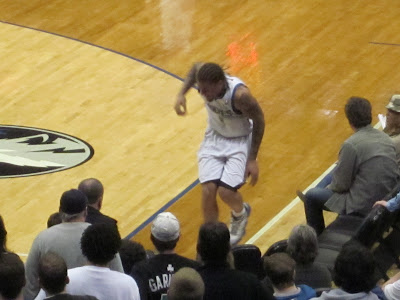 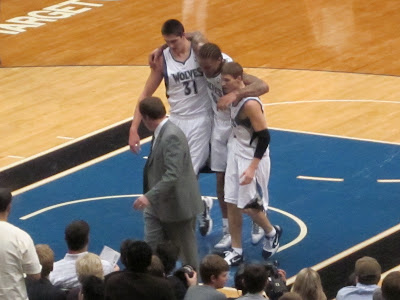 Spurs maintain their dominance and improve to 32-6.  Timberwolves settle for 9-30, and everyone hopes Beasley's not hurt seriously.

Here are my Tweets from the game.   If you're not following, you're missing out.  Most recent Tweets are on top and the older ones are towards the bottom.