Rockets defeated the Timberwolves ~ Brooks throws up the "loser sign"

The Houston Rockets came into the Target Center last night and defeated the Minnesota Timberwolves.  The final score was 125-129.  The game didn't really get exciting until the end when the Timberwolves started to make a run.

For $40 I picked up my $105 ticket from a scalper and was ready watch "Amazing happen".  To be honest, the only thing amazing was my soft serve, chocolate ice cream in a cake cone.  The treat was so good that I had two of them, but I digress...


Before the game another guy asked if there were any stars on the Houston Rockets.  I answered for the guy, "Not unless you count Shane Battier as a star."  I kept it moving.  I actually am not familiar with the Rocket's line up.  I just know that without Yao Ming, it's tough to watch them.  ****  I wasn't going to debate Shane Battier's star level.  He's a Duke alumnus, so therefore I support him. 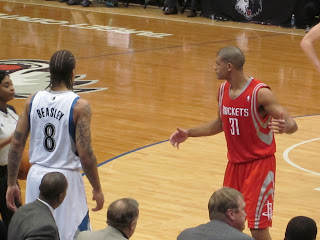 Speaking of Battier, I couldn't help but notice he was guarding Michael Beasley.  Talk about opposites...  Battier is clean cut, and Beasley isn't...  Personally, I like Beasley's game better.  It's more exciting. 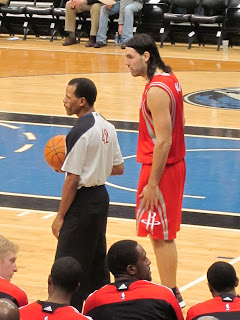 Honestly though, with Luis Scola's freakish resemblance to adult Jesus, how were the Timberwolves expected to win?
Speaking of look-a-likes...  Who's the guy on the Rockets' staff that looks like American Idol judge, Randy Jackson?  I could look it up or you can just tell me. 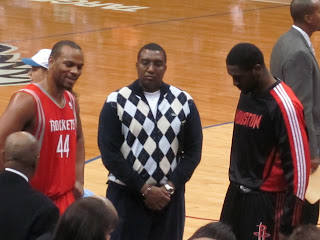 One more doppelganger...  Am I the only person that thinks Rick Adelman (i.e. in the mock turtleneck and coat) resembles Will Ferrell doing his Sean Connery impression?!?!  I can't be.  I wonder if Adelman can do the accent... 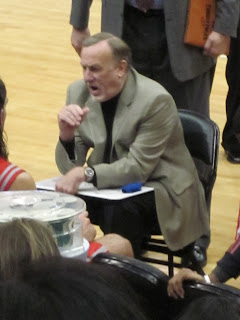 Things during the game were ho-hum, but got more interesting around the last two minutes.  Yes, everyone says you don't need to watch an NBA game until there are 2 minutes left on the clock.  In this case, around the 2 minute mark, Aaron Brooks and Kevin Love tussled and Brooks threw the ball at Love's chest.  Have you seen Brooks and Love stand next to each other?  Brooks more or less comes up to Love's armpit.  Regardless, it was a weird exchange and Brooks hit the Rockets bench shortly after.
After getting his 6th foul, on his way to the bench in case Timberwolves fans couldn't read the scoreboard Brooks flashed the "loser sign" to the Timberwolves crowd. 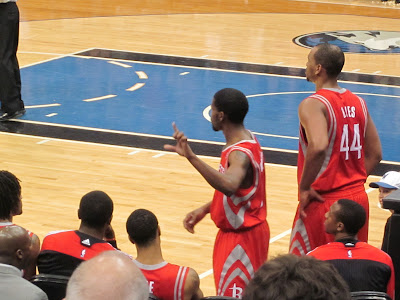