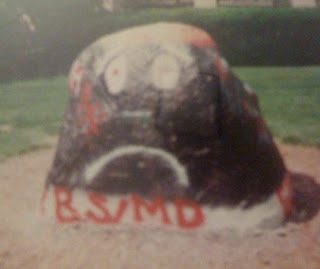 I tweeted this last night, but I should do a post because it's worthy.  I only watched the last couple of minutes of regulation and the entire overtime, but I want to say congratulations to my Akron Zips on defeating the Kent State University Golden Flashes for the 2011 MAC Championship.  As a result of winning the MAC Championship, the Zips punched their tickets to the Big Dance...

March Madness is a rarity for my alma mater compared to my brother's school (i.e. Duke) so I'll take the victories I can.  ****  Don't get it twisted.  I was accepted into a number of other schools but my dad wanted me to become a doctor and sent me a school where I could complete an accelerated BS/MD program and become a doctor in 6 years instead of 8.  I'm starting to digress and this has nothing to do with sports ~ but let's make it clear...  I'm SMART.  I went to medical school ~ I just didn't want to stay, once I got there.

For those of you that don't know, Akron and Kent State are close to each other.  Most nights you can find students from either school out and about in the other city.  I found the match-up interesting because of the degree program I was in.   ****  Three schools:  Youngstown State University, Kent State, and the University of Akron were a consortium that fed into one medical school.  When I attended the school, it was named: Northeastern Universities College of Medicine.  Incidentally, I think they've renamed it recently.  But I digress again....

****  Here's some trivia: Jason Taylor, the football player went to Akron when I was there.  Yes, that really good basketball player was born in Akron also...  Who am I talking about?  Stephen Curry of course.  Who were you thinking of?