Review ~ Late Rounders: The Long Hard Road to the NFL 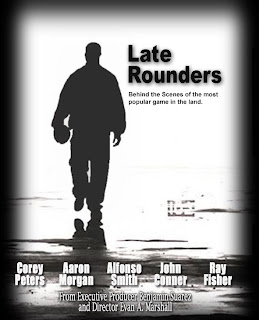 With the combine coming to an end and the NFL's Collective Bargaining Agreement expiring on Thursday at 11:59PM, I started thinking about football again.  Personally, I think there will be an NFL Lockout.  So, in an effort to keep myself thinking about football, I became curious about a documentary I heard about that chronicles the story of a few football players trying to make it into the NFL.  I requested and received a screener copy of the documentary Late Rounders: The Long Hard Road to the NFL.  I enjoy a good sports movie, but Late Rounders is unique in that it is a documentary focusing on several NFL prospects as they train and prepare for the NFL draft through the NFL combine and pro days.

The story for Late Rounders is told by the agents from HOF Player Representatives, the players themselves, and those closest to them (i.e. a significant other and trainers).  Many of us are used to only seeing highlight reels for athletes and never get a chance to see what it's like for a player to wait, wait, and wait for their phone to ring on draft day.  There's probably a reason for that.  It's not easy to remain optimistic and hopeful as teams make their selections and a player's name starts to slip and/or remains on the board.

I've never been one to watch the NFL Draft, but I know who Mel Kiper Jr. is.  The NFL draft is notoriously long.  There are SEVEN rounds.  Yes, seven.  It's no secret that basketball is my first love, and I don't even watch the 2nd round of the NBA draft.  ****  To be honest, I only watch the first 20 picks in the NBA draft and then I'm done with it.

As a spectator, I can't fathom anyone hanging in there for 7 rounds for an NFL draft.  However, for these men (i.e. featured in the documentary) their futures are on the line and they will wait.  As they wait, their friendships grow and their resolve is tested.  If/When their phones ring, it can be the chance they've been working their whole lives for...  They just need their phone to ring, or do they?  There is more than one way to skin a cat, and there is more than one way into the NFL.  If you're not drafted, there's free agency, and players need to understand all of their options.  Not all the roads are the same, and not everyone travels the same path to reach his destination. This documentary is about the journey in addition to the destination.

The road into professional sports isn't easy.  Some people are born with a genetic predisposition to be better at certain sports (i.e. body type, metabolism) but work ethic and desire also play a part in shaping one's future.  As director, Evan A. Marshall takes you through the journey to the NFL for a few players (e.g. John Conner, Corey Peters, Aaron Morgan etc.) you begin to pull for these men as they pursue the "chance" to prove themselves.

These men are not JUST football players.  They are men with an intense desire to play football.  There's a difference.  Late Rounders shows you the human side of the road to the NFL.

After the screening, some of the stars from the film will be on hand (along with Evan, the director) for a Q&A with the audience.  To see a trailer, sample clips and more info on the film visit: http://www.laterounders.com/