I overheard a guy, on Thursday, asking an usher who was playing on Saturday.  Umm, yeah.  Obviously the guy is new to March Madness.  I told him that there was no way to know Saturday's match-up until the games on Thursday were played.  He still looked confused.
﻿ 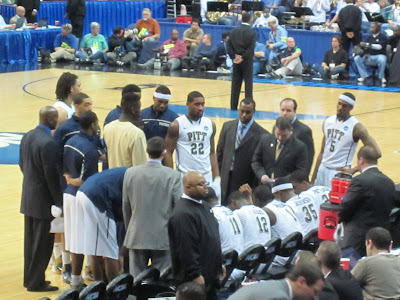 ﻿ I'm looking forward to tonight's Butler v Pitt match-up.  I'm rooting for Jamie Dixon's Pitt squad.  The 2nd game on the schedule is Cincinnati v UConn.  I'm from Ohio, so I'll be rooting for the Bearcats.  I'm not a Jim Calhoun/UConn fan.  I'm not sure why.  UConn is such a tough team, but I like to root against them.  I have to admit it, that it was exciting to watch Kemba Walker play on Thursday.  After the game, Kemba signed some autographs for UConn fans in the student section where his mother was sitting.  Those are some lucky fans!

Oh, and for the record.  Louisville killed my bracket, so don't even ask me about it.

Based on what I've ingested, if I don't have a heart attack, I'll see you at the Verizon Center tonight!