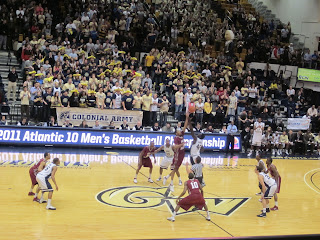 Last night, I went to the Charles E. Smith Center to watch St. Joseph's take on George Washington University.  I figured I needed to get into college basketball mode, and when my friend, Teri, mentioned the game I wanted to go too.  As the starting line-up was announced, I noticed the international and diverse starting 5 for GW.  There was a Canadian, Serbian, Nigerian, a Californian, and a New Yorker ~ all of them representing DC.  Cliche, yet very appropriate.

﻿﻿ ﻿﻿ Once the game went into overtime, it appeared that GW ran out of gas.  If you live by the 3, you can also die by the 3 and the 3s weren't falling for the Colonials in overtime.  Now, GW's season is over, but from what I could tell, no one was crying.  ****  Sorry, that was a jab at the Miami Heat.  I couldn't resist.  As Teri and I left the game, there was a father-son combo talking.  The boy had to be about 5 years old.  The father was telling his son, that the GW coach (i.e. Karl Hobbs) and assistant coaches may be gone next year, and asked his son what he'd do if that was the case.  "I'll watch Texas games," the kid replied matter of factly.  Well at least the little boy knows what he's doing next season.

Final score: St. Joseph's 71, George Washington 59.  Langston Galloway led the Hawks with 15 points, and Tony Taylor had 22 points in a losing effort for the Colonials.