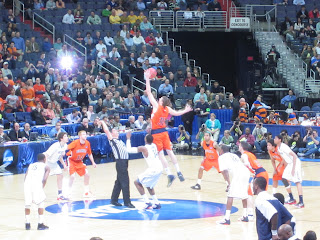 After watching 12 games of the 2nd and 3rd rounds of the NCAA Tournament, I needed to take a time out and collect my thoughts.  Rather than go game by game, I'm going to try to post my highlights.
The first game of the 2nd session on Thursday night started off with Bucknell v UConn.
****  Notice that UConn, didn't even jump for the opening tip.
Don't worry Huskies' fans, we all know your team showed up to defeat the Bucknell Bison by a score of 79-52. 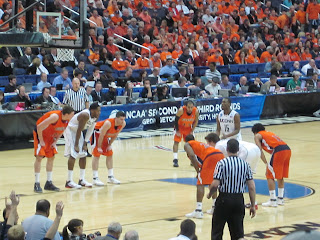 I finally had a chance to watch UConn's Kemba Walker in person.  Here are some of my favorite pictures that I took at the sessions in Washington DC at the Verizon Center.  As for you that aren't sure who to pick between the Jimmer and Kemba, I'm right there with you.  I haven't seen Jimmer play live (i.e. yet), but Kemba Walker is definitely special.
I checked a couple of different websites and they all say that the final score was 81-52.  That's funny.  I took a picture of the scoreboard and I saw 79-52.  Ultimately, I guess it doesn't matter even for the gamblers (i.e. since the margin of victory was so high). 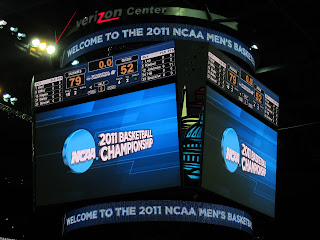 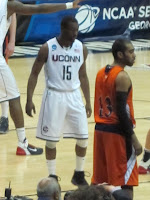 UConn's Kemba Walker finished the game with 18 points and 12 assists.  More importantly, UConn advanced to play the University of Cincinnati on Saturday.
THE WIRK
Posted by THE WIRK at 1:01 AM