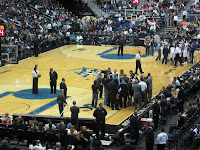 Saturday night the Wizards had the visiting Minnesota Timberwolves in town at the Verizon Center.  Kevin Love was in town and brought his 49 game double-double streak to town.  It's no secret that I've seen plenty of Timberwolves' games this season.  I'm actually a fan of the young team and enjoy watching Michael Beasley and Kevin Love play, so when I was offered a free ticket to the game you better believe I took it! 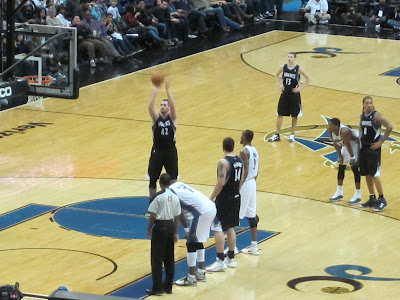 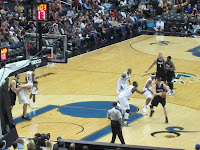 Kevin Love didn't disappoint.   He notched his 50th double-double game, even though the Wizards ended up victorious.  The Wizards went into the game losing 7 games in a row.  Both of the squads are young, but Minnesota hasn't learned to pull out close games YET.  ****  This is a skill the Miami Heat are trying to master also, so I'm not really going to slam Kurt Rambis' team that hard for being young. 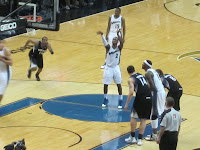 Another reason I was interested in the game was because I had yet to see John Wall play a real game "live".  I watched Wall play during the NBA All-Star Rookie Challenge, but that didn't count.  Wall finished the game with a double-double (i.e. 18 points and 11 boards), but Andray Blatche was the Wizards' high scorer (i.e. 20 points).  In a losing effort, Michael Beasley dropped 18 points, but Kevin Love contributed 20 points and 21 boards.  WOW.  50 double-double games, in a row...  ****  Moses Malone's record of 51 consecutive double-doubles looks like it's going down!
This game was winnnable for the Timberwolves, but when asked by the guy next to me if I thought the T'wolves would pull it out, I said, "No."  It was what it was, and the Timberwolves just don't have that killer instinct YET...  Tough loss.
Final score:  Timberwolves 96, Wizards 103.