TheWirk.com takes in Charlotte for the NCAAs ~ Well, at least her avatar did

﻿﻿﻿﻿﻿﻿﻿﻿Sarah can't be everywhere, so TheWirk.com is engaging fans and followers of the blog to create a "THE WIRK Avatar" to take to sporting events in their area and report back on the action and highlights.﻿﻿﻿﻿﻿﻿
Lucky fans and followers who post pictures like this of "their" THE WIRK Avatar at sporting events they attend may get a chance to meet her at a future event when she comes back around to their city.  ****  You may even get a seat upgrade, because she sometimes has extra tickets on her.
﻿﻿
RixStar was hanging out with a "THE WIRK Avatar" in Charlotte for some Eastern Regional NCAA Basketball Action at TimeWarner Cable Arena.
﻿﻿
﻿
﻿Duke defeated Hampton in the early afternoon session.  THE WIRK had choice 4th row seats for this first session match-up, thanks to a hook-up at Hampton University. Go RixStar! 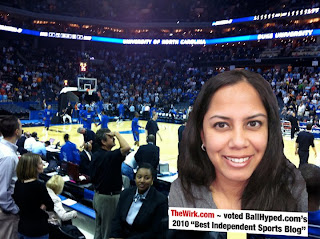 THE WIRK, is a Duke fan (i.e. her brother went there) but she also like UNC, unless they're playing Duke.  Go Tarheels!  In one of the night games, John Henson hits one of his 28 points in UNC's victory over Long Island Univ. 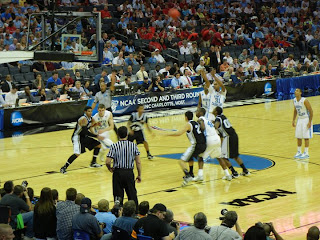 THE WIRK is all about entertainment inside and outside of your favorite sporting venues. She knows where to hang out and have fun after the games.  Here she is at the Epicenter entertainment complex across from the Time Warner Cable Arena in Charlotte. It has 3 levels of restaurants, lounges and other night spots﻿.
﻿