Ohio State makes it look easy, as they advance to the Sweet 16 ~ 2011 NCAA Tournament 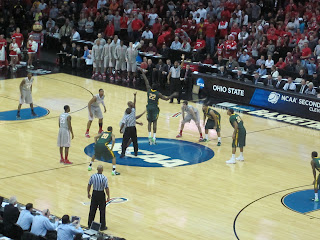 The Ohio State University is in Columbus, OH but for all intents and purposes, it might as well have been in Cleveland for the 2nd and 3rd rounds of the NCAA Tournament.  Ohio State has been a dominant force in the tournament and during the season.  Ohio State has been so successful that there really isn't anything to say about them during March Madness except to say that they're GOOD.
George Mason University can attest to the Buckeye's strength, since Mason's road to an NCAA Championship ended on Sunday with a loss.
Here are some of my favorite pictures from the game.  I meant to shoot video of the Quicken Loans Arena crowd doing the O-H-I-O cheer, but you can picture a sea of red shirts raising their arms and yelling out the letters, just as easy! 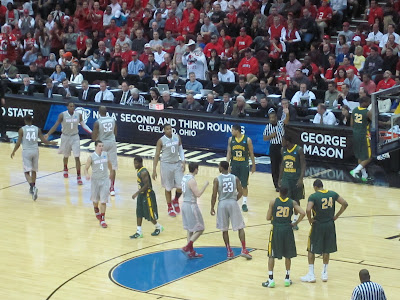 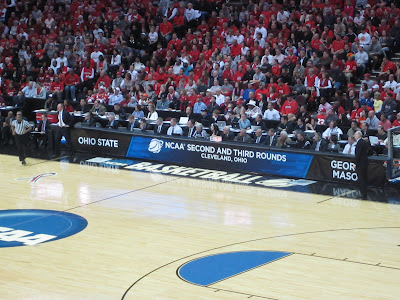 At the end of the 1st half, the Ohio State led George Mason by a score of 52-26.  The final score was 98-66.  ****  The man I was sitting next to, told me that Mason was without its best player, since he had succumbed to the flu.  Wow.  Tough break.
David Lighty was perfect behind the 3-point line (i.e. an impressive 7 for 7) for the Buckeyes and scored 25 points.  Jared Sullinger and William Buford both dropped 18 points for the win.  Ohio State is scorching and playing complete games.  I like what I saw...  Further, with all the strange upsets, maybe my bracket isn't so busted after all.
I need to work on tickets in Newark at the Prudential Center.  The East bracket is HOT...   Let the March Madness continue!
THE WIRK
Posted by THE WIRK at 2:45 AM